Me a City Gal?

Seems I'm always a week late making my posts--I used to make a one paragraph post every night when I first started blogging back in NYC on Yahoo 360.  Each night I would get home around midnight after a 12-14 hour tour of crazy EMS runs in the city and it would take me an hr at least to unwind before I could hit the hay...so I would fire up my desktop and write a little one paragraph wrap up blog post on my day.  I had no digital camera then...so my posts had no photos...eventually I bought a little 3 MGP digital camera (still have it), and I started to add some photos of my day in the city....I would just snap photos out the window of the ambulance as we traversed east to west  north and south all over the 5 boroughs of NYC. 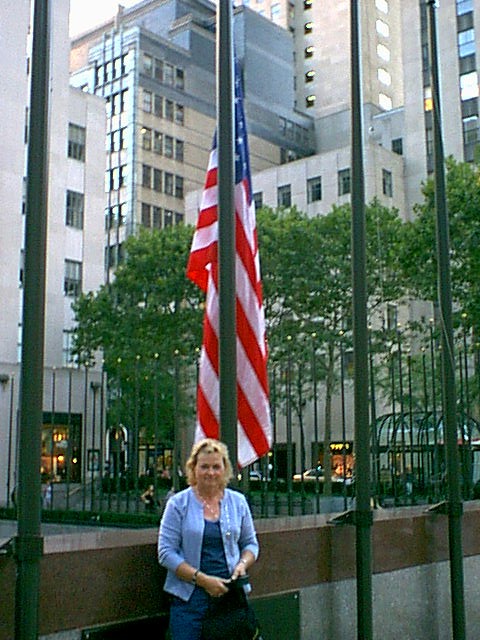 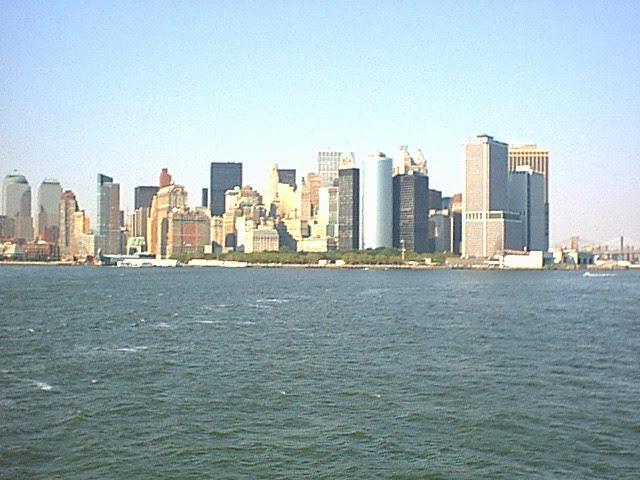 That has nothing to do with this post just saying that I used to blog nightly...and sometimes it was a rant of some sort of an incident--- sort of a decompression tank---...it was eventually  filled with my need /desire to get myself OUT of NYC! LoL...so many people wanted in and I wanted out...after 5 yrs I was burnt out , The Thrill Was Gone for sure.  So I began my exit plan in 2006---and now here I am 10 yrs later!

Last week I took a walk around my local park to see what was out and about... hiked around the side of Goodale lake.. 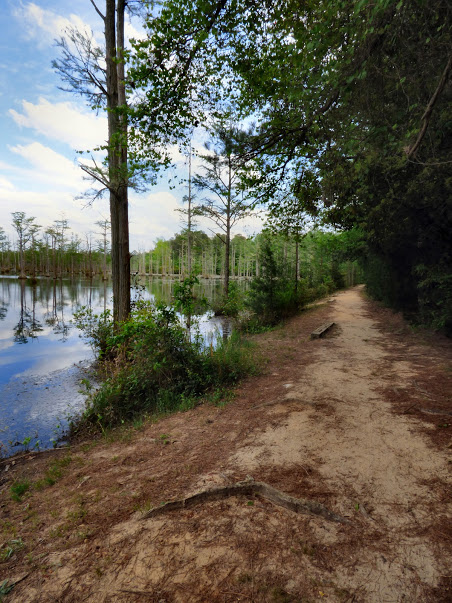 A Great Blue Heron flew to the back side of the lake as I approached and some kind of Sandpiper I got no photo of either one, and I still don't know what sandpiper it was...but I got a photo of this bird at first I thought common grackle, but all the other grackles around were boat tailed grackles, so I think this is a Brewers Blackbird.  To me he is just too small to be a grackle...what do y'all think? 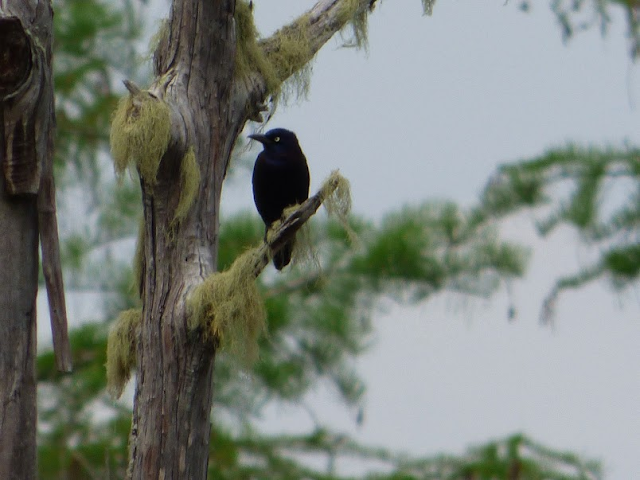 The lake looked so lovely almost HD under those fast moving clouds...the water lillies were blooming, I always think of the Lotus flower as a lantern all aglow... Another fellow was there with his camera and we compared notes on the 4 clumps of pitcher plants now reduced to only 2 clumps!! I don't know why the parks employ people who don't have a clue about the plants, animals, and environment they are charged with the care of--when I asked a new ranger who was taking a kayak out on the lake if he had seen the sandpiper he said "Now tell me again what a sandpiper is"...OKAY.....nuff said---- here are 2 of the  pitchers in one of the clumps they are currently forming blooms... 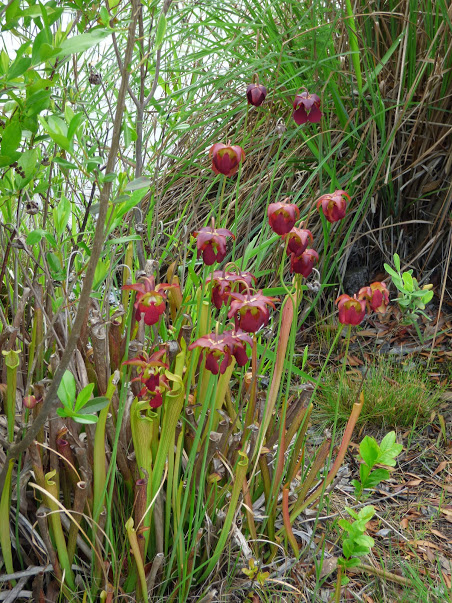 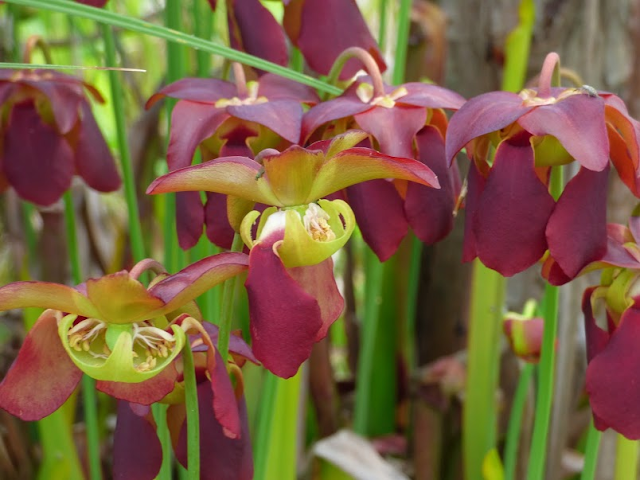 and here is the Ranger, aka grass cutter... 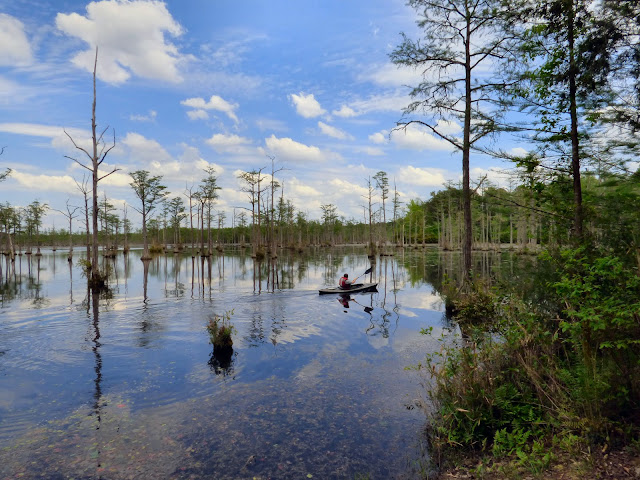 I saw a very backlit Orchard Oriole it's a first year male, 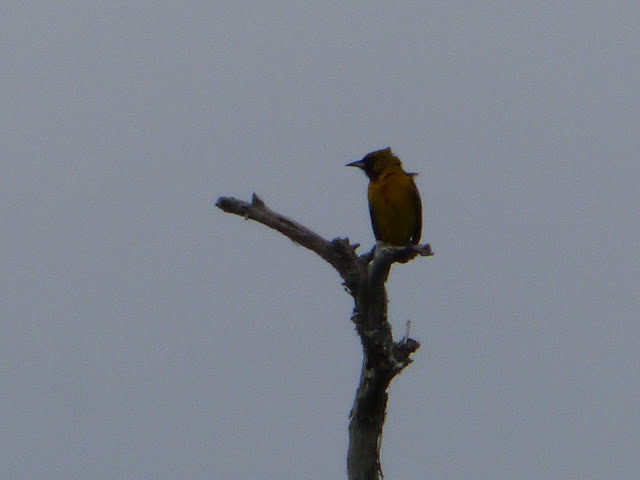 Great Crested Flycatcher, Blue Grey Gnat Catchers, Black n Whites, and a Prothonotary Warbler was calling in the thick woods but no sighting..just about then the kayaking Ranger flushed the only Wood Duck of the day....I snapped this Tufted Titmouse singing up high... 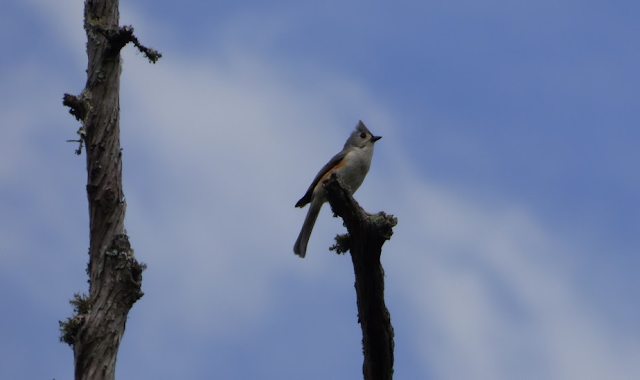 around the backside of the lake I saw 3 female Red-winged Black Birds feeding in the new needles of the Cypress trees.. 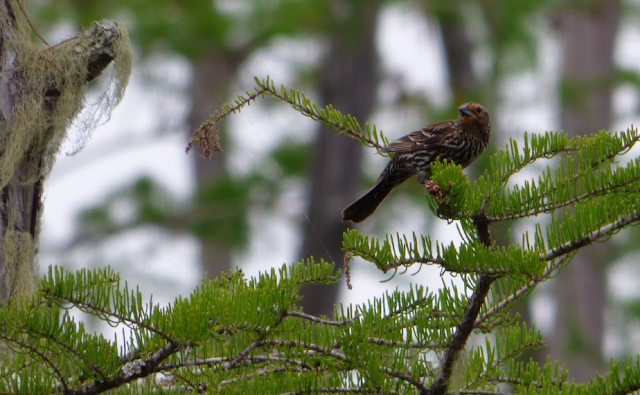 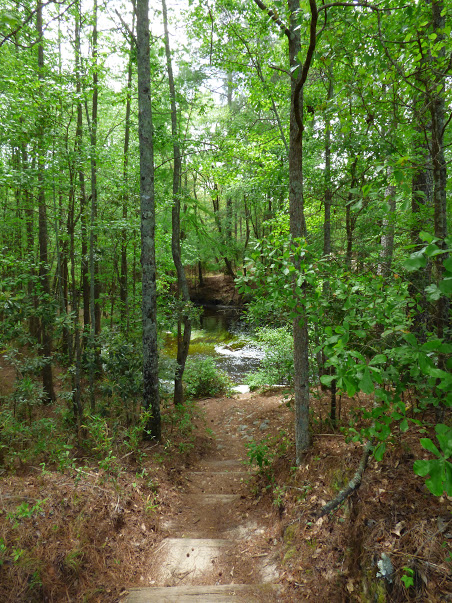 I saw this Skink scurry up a tree as I walked up.. 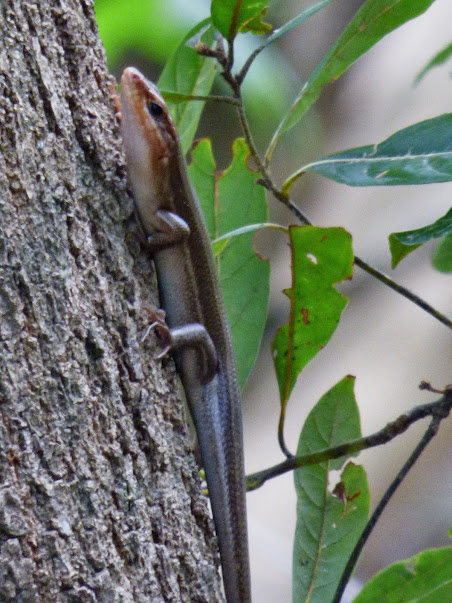 out on the lake saw an Eastern Kingbird, Black Vultures circled, and I heard some Canadian Geese do a fly over but they didn't stop!  I headed over near the boat rental area and startled this Savannah Sparrow, and he was very patient while I took his photo. I had a great walk around didnt' see anything new but it sure beats any day in the City!  Living in the city was quite a thrill and added a lot to my life experience but I am just not a city gal...

PEACE
Eleanor Roosevelt: You must do the thing you think you can not.
at 6:20:00 AM