After my brush with the law I was free to speed across the desert at 75 mph...I never reached that speed on this highway...and soon it was time to head South on 385.  If you look at the map you see that roads are sparse in this area! From Langtry to Marathon there is not one single state highway heading south.  Hwy 385 takes you into Big Bend National Park, at Persimmon Gap over 1,200 sq miles of desert, mountains, canyons, river, and more!

If you want to see and do everything in the park plan to stay a month!! If you have 3 days planned as I did, prioritize. The nice man at the gate told me Chisos Basin Campground was full, he said Rio Grande is basically empty and has shade, and Cottonwood has shade.  Rio Grande Visitors Center was closed end of April, the store is open, and Panther Junction Visitors Center 26 miles down the road is open. The reason for the closures? Heat! They don't keep everything open in summer, in fact Rio Grande is NOW closed for repairs till Sept 1st. 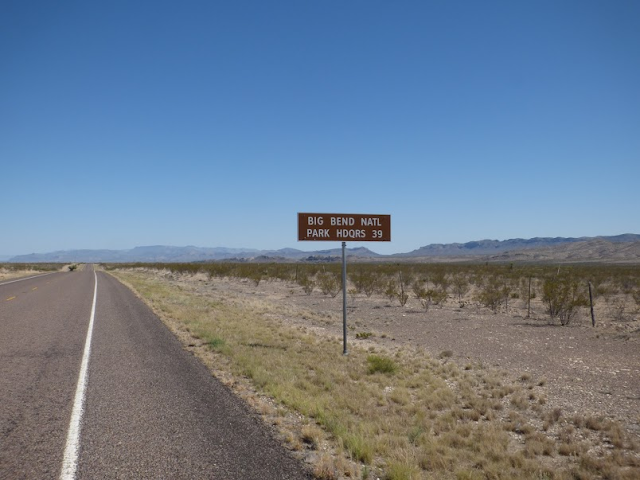 So from the entrance to my campground was 48 more miles of driving.
The scenery is amazing. 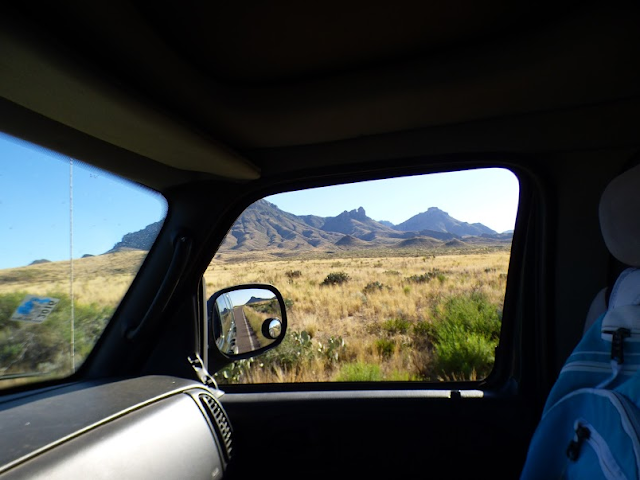 The custom of taking a siesta is a good idea be active in the mornings, and then rest through the heat of the day say 3 to 6 then you can get active again once the sun begins to finally set.   The desert dry air cools rapidly. You will sunburn then you will freeze at night. 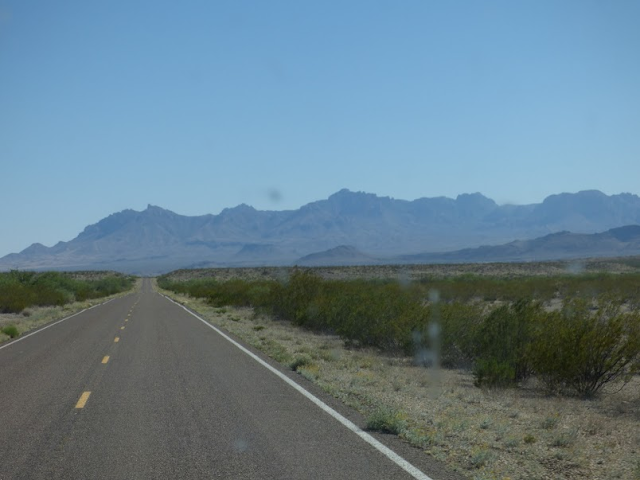 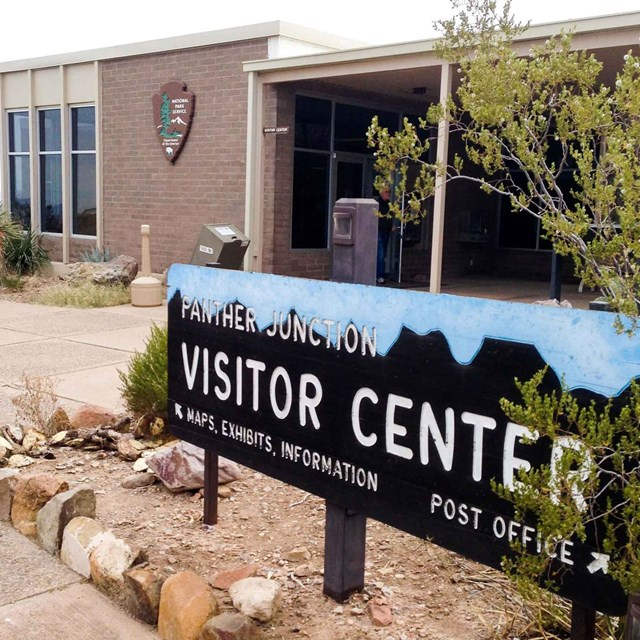 You can watch a nice 20 minute movie in an air conditioned theater room narrated by Peter Coyote, and learn all about the history and evolution of the park as well as a lot of info on what to do and what to see.  And there is a post office here! I mailed off the cards I purchased in the Visitors Center.

It had been a rather long and trying day with the cop stop and the gas threat so I was ready to just go to camp, and conceal but consume a nice cold Corona.  I'm kinda getting ahead of myself because before I stopped at Panther Junction, on the way I passed the newest thing in the park, this open air  Bone and Fossil Exhibit.  Very nicely done.  The entire thing is solar powered....no facilities but it is super nice. 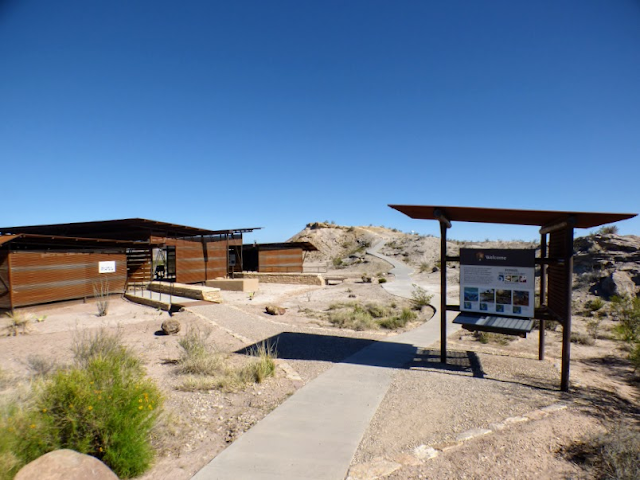 It is completely self guided and the nice breeze in there was amazing.  The exhibits were awesome... 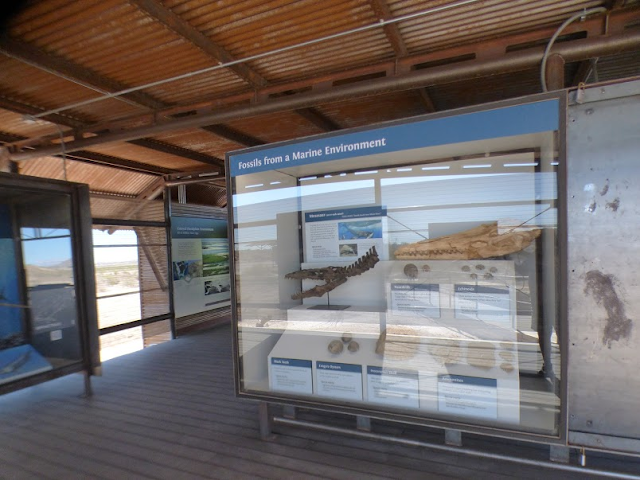 Are  you the read it all or the scanner like me? I scan and glean what I find most interesting and focus on that... I def look at all the pictures, displays, and artifacts.   I briskly move through...I had this entire place to myself...one car made a u-turn and left...their loss as it was so fascinating!! 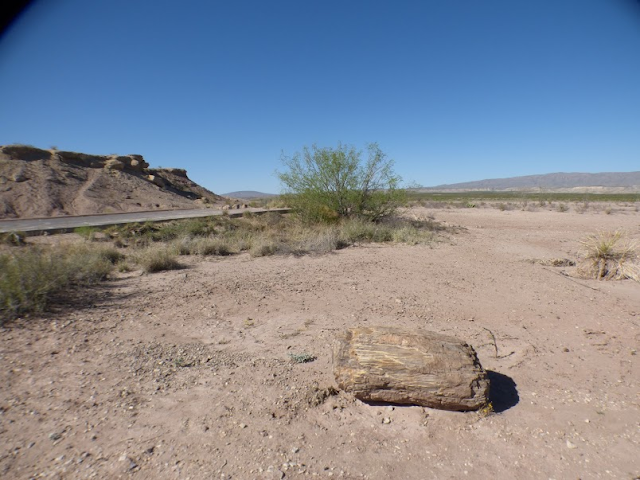 a nice chunk of petrified wood outside.. 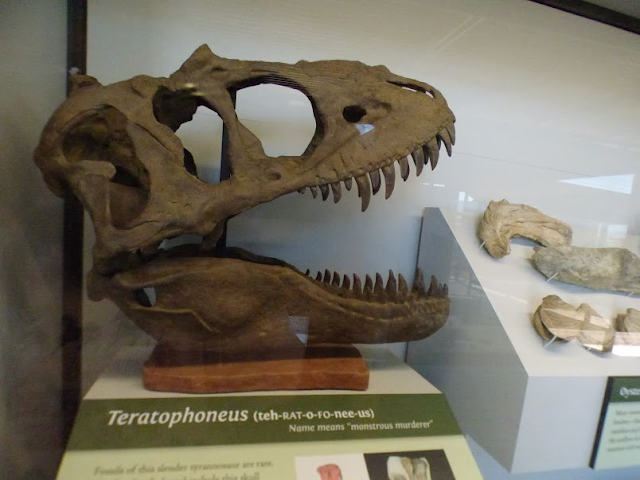 When I entered the exhibit some birds who had escaped the heat up in the rafters  flew over to this ledge...
yellow headed black birds.  I found this odd since I always put them on fertile plains, but considering the seed pods of Yucca, I could see why they are in this area too, and of course the fertile ribbon of green that follows the Rio Grande while it separates Us and Them.  I caught 3 of the black birds in this photo...they scattered up that hillside. 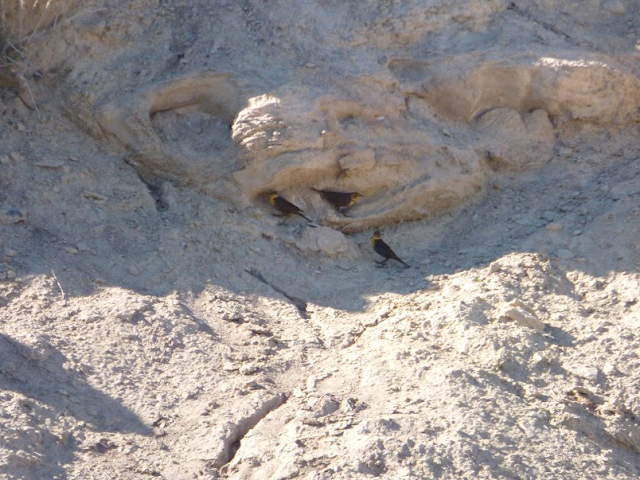 More amazing scenery as I resumed, now 40 mile trip to the campground. 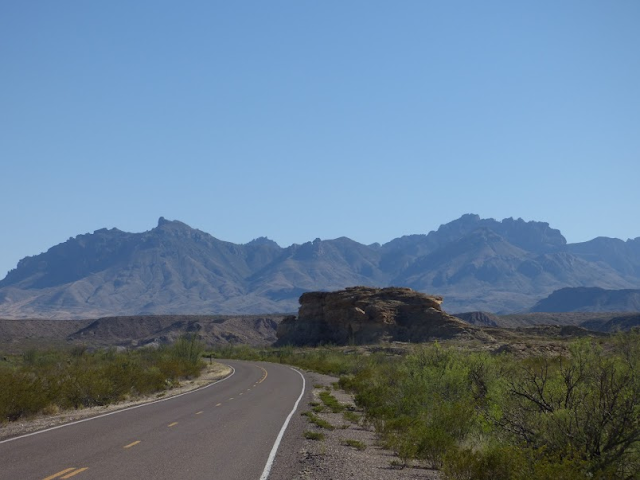 I took a short walk to see this, a Desert Grave.  I am a firm believer in using the original..who's big idea  was it to place a modern headstone in front of the original at the grave of Nina Hannold(?) who died due to complications of pregnancy in 1911.  She was a homesteader here in the early 1900's with her husband and she asked to be buried here.. 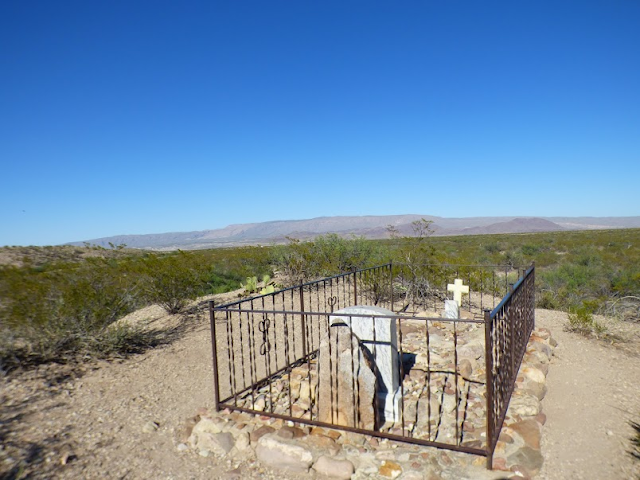 The small stone was for the unborn child...I did not photograph the new stone I felt it really was a sin to be placed DIRECTLY in front of the original one...and I know Nina would have objected!  (It should be removed) 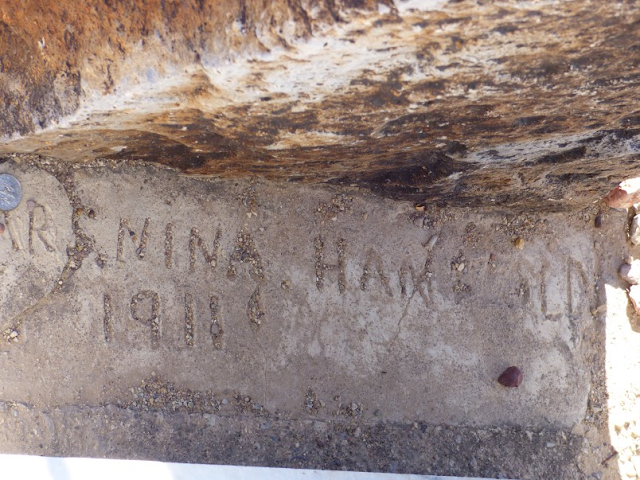 She had another visitor... 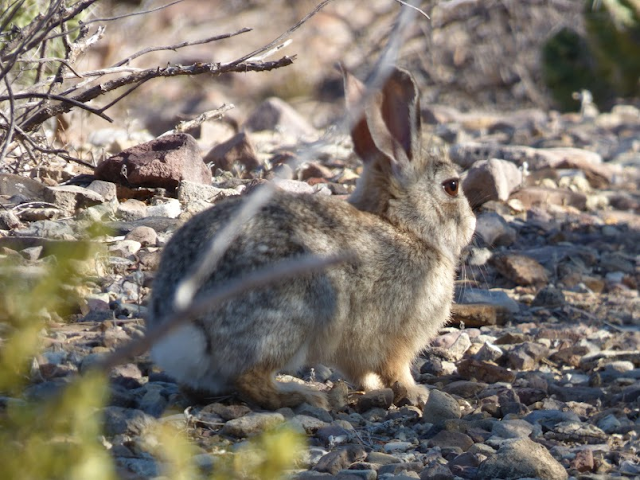 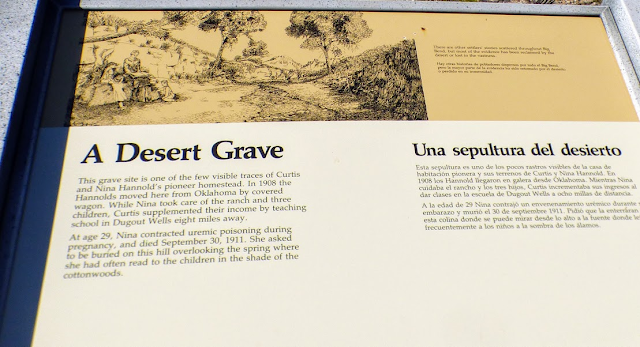 I found so many beautiful pull off spots along the drive to the campground, I figured I was in no rush as not one single car has passed me so I figured I would have plenty of open spaces to pick from. 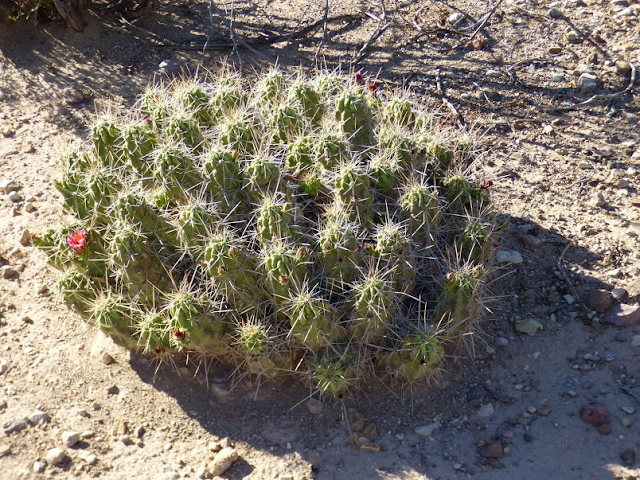 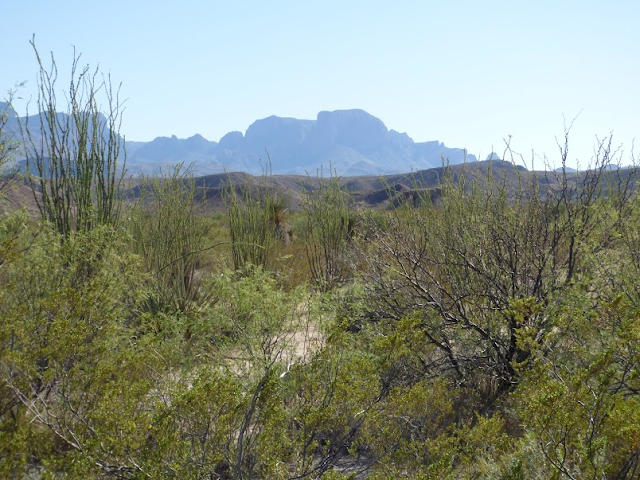 Early or late afternoon light is just right to bring out some of the awesome color in these desert landscapes...harsh mid day light was hard to deal with for sure. 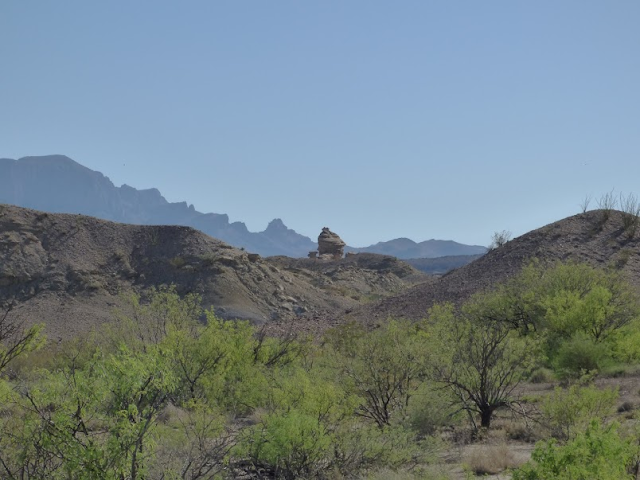 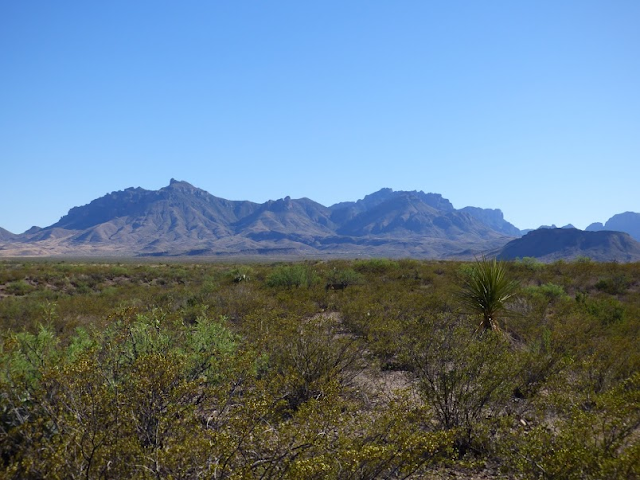 Once I passed through this tunnel I was about to the campground..I passed some signs pointing the way to sites I would explore tomorrow like the Dug Out Wells, and The Hot Spring, 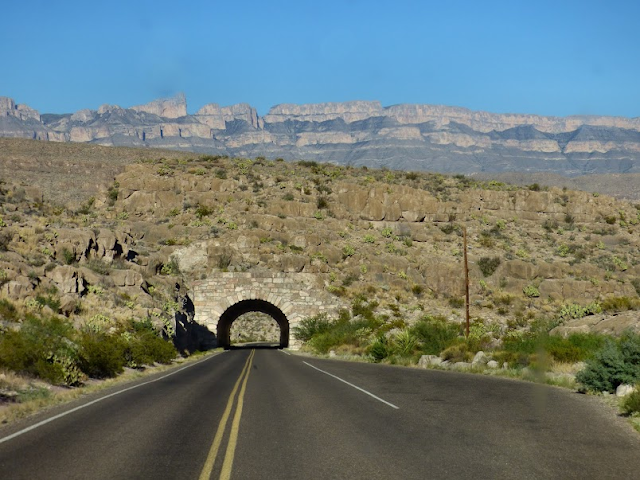 As I said the Rio Grande Visitors Center was closed the store was open they have some high priced groceries, and ice...and gas at $2.90 per gallon.  I got myself into site #7.  Each site has bear proof food storage locker, a table, and that's it.  There are flush toilets, and water in the campground, but fires are not allowed nor charcoal cooking....Plenty of Big trees but shade was still hard to find as it moved as the day grew longer.... 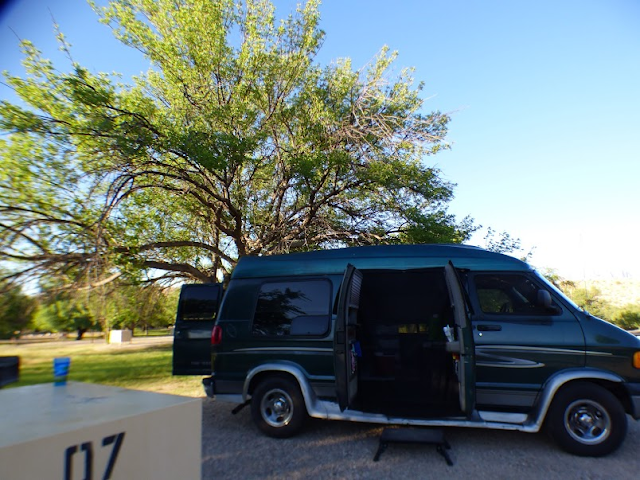 I started out in the shade then it moved....

The cool thing was immediately I see Vermilion Flycatchers all over the place! 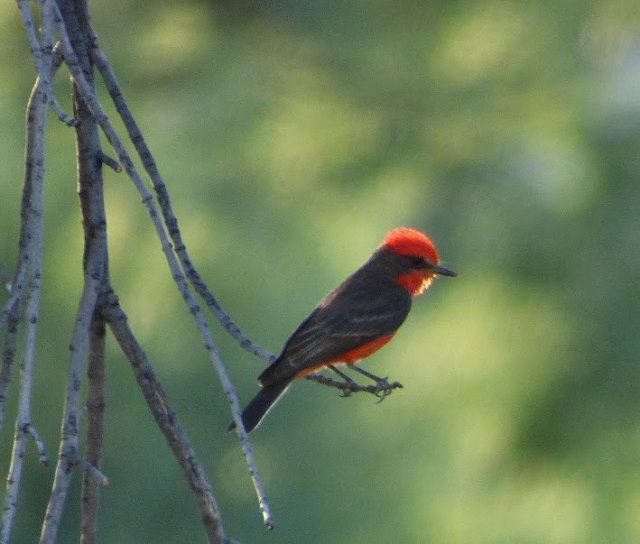 males, females, and immatures hunting all around the campground in the big cottonwood trees. 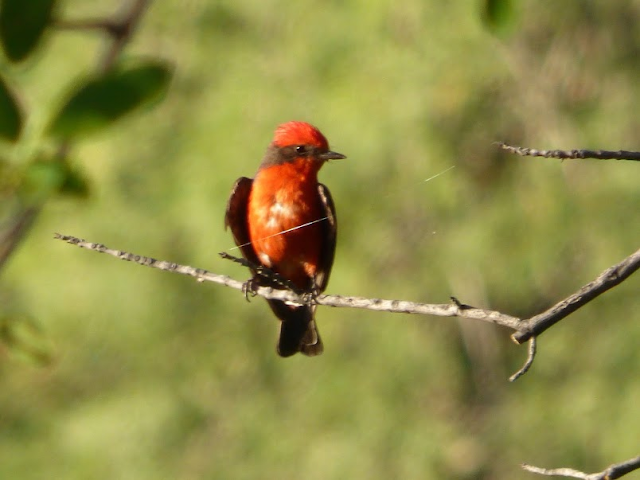 They are amazing acrobats...tho the young seemed intent on asking dad for hand outs instead of giving it a try on their own. Lifer #39 on this trip! I sat down with my binoculars and camera and watched these guys for a while as well as Summer Tanager. 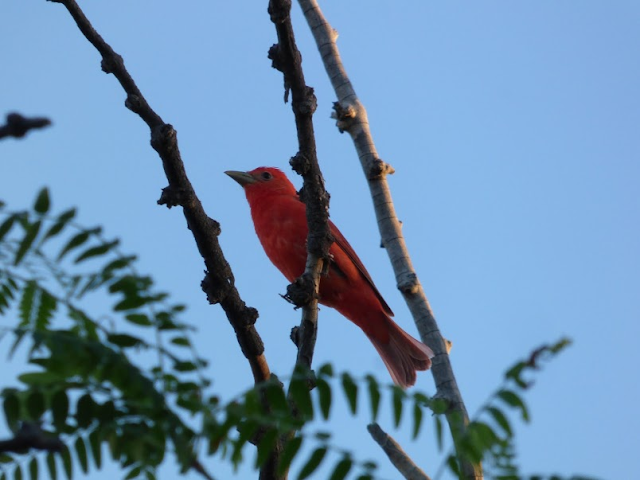 And some yellow rumps of various "taxa" I wish they would split these up..just not fair NO tick for all the different ones...
The Audubon's Yellow Rump (+1 other taxa)? 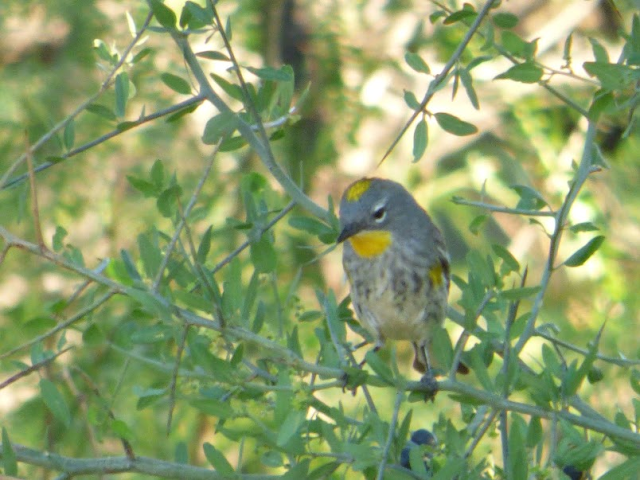 Then I walked over to fill out my envelope and put my $7 in the till for one nights senior camp fee.  At the iron ranger I met 2 young brothers so excited to be moving from San Diego to Maine, they said they wanted a fresh start they were tired of the crowds and the high cost of living....and they had a nice truck camper pulling a trailer filled with their prized worldly possessions.  One is married and his wife was from NH originally so they bought a 7 acre spread in Maine, for less than they are paying for an apartment in San Diego!! So My hats is off to them for taking the plunge and switching coasts! They drank beer way into the night laughing and I'm sure recalling boyhood stories...made me miss my sisters!!

It was about then I saw the SWEET Bulldog with her family the couple originally from Michigan! I couldn't believe nor could they...we were about 5 sites away from each other...such a small world.

I settled down at my picnic table and ate a sandwich as the sun tipped to dusk....that was when 3 men made a direct bee line towards me, they walked with great intent and at first I thought ut-oh who did I piss off?? So I just sat and waited till they approached me, one spoke... "saw you birding the campground earlier so this may be of interest to you also."

WHEW I let out a sigh or relief..."yeah....?"
Right here behind your van in this tree see this hole...I could barely cause it was almost dark...
"Yeah" I saw where he pointed...
"We've checked every tree in the campground looking for the Elf Owl's nesting hole, we have determined this is it....if you have no objections and maybe you would like to join us, we want to see if we can get an appearance."

"Sure, I mean it's fine with me, I stood in mosquito infested woods for almost 2 hrs not long ago and saw nada, so yeah, sure."

He pulled out his phone and played the call for about 3 repeats...we know it's not kosher to do that but once in a life time for all of us....I had my camera aimed at the tree had put the setting on "dark starry night" setting, I couldn't even see the tree in the viewfinder...and then someone said there it is...so I snapped..and this is what I got. 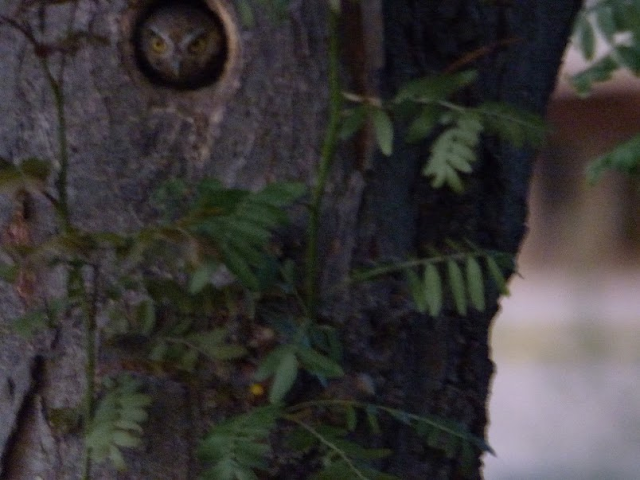 Just barely got the dang hole in the frame...I tell you it was dark...they had flashlights with them but I was happy none of them tried to shine it on the tree...just used them to get back to their campsites!  One of them told me he had hiked the day before to see the Colima Warbler, "was it there?"
"Yes it was there, but If I had it to do over again I would make it an overnight trip it was a 10 mile hike with 2,500 ft elevation gain, and a tough hike too."

Okay, well I had heard it was a tough hike, 10 miles in the mountains in the 90+ heat so no.  I did not put the Colima on my wish list because I knew ahead of time I was not going to make the trek....

Here is the low down,
But I'm not dead yet, just need to plan better....

SO just what did I do in Big Bend??