ITS in the WORKS!

The weather has not co-operated lately last week snow, this past week rain, and more rain tomorrow and who knows how long it will rain...I dont like dreary weather...blahhhhhh

SO once again I've been working on the OLD HOUSE...
Ive got so many projects going on at ONCE...its not all ADHD, its partly the weather! I have only weekends to do anything I need to make a trip to Lowes with my trailer to buy supplies to complete some of my projects and with the rain I found an old leak that supposedly was fixed is BACK...SO I had to repair that first I spent the whole day Sunday on the roof...I HOPE my work pays off I will know soon enough since rain is forecasted..No photos of me on the roof, cause I was ON THE ROOF..ha!
But here is dang leak and the resulting damage... 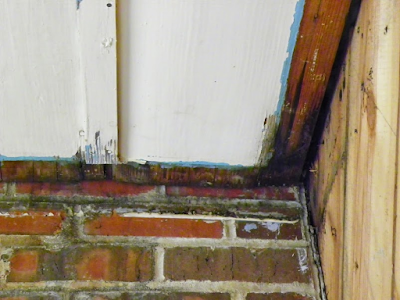 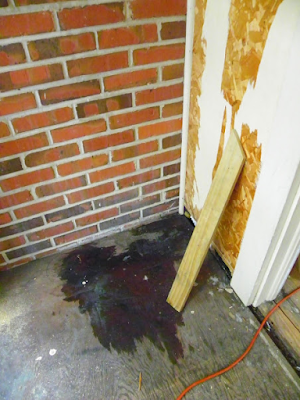 Meanwhile I pulled out that old bookcase that used to be a window! A porch that was walled in to become a room had a window at one time, I made it into built in shelf,  but I think I would prefer more light so I took the shelf out. I may open up that whole SPACE...If its possible and add some BIG Beams shabby chic, rustic meets contemporary, cabin meets loft??? OR I may just close up the spot and put back a shelf unit only do it right this time!! That would certainly be the easiest Thing to do..or put in a glass door and get the benefit of the light. OR a shelf unit with some glass blocks behind it? NOW that may be cool..

I lost all my photos of this in progress so here is what I did do.... 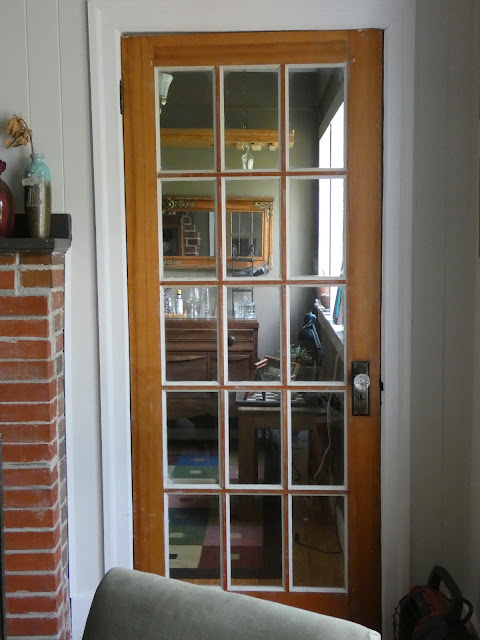 I put in a French Door

I also repaired the attic stairs 2 of the steps were missing...I needed to go up there so I fixed that....
and Ive been chipping away at WALL PAPER omg I will never ever ever get back together with Wall PAPER!
And in this house...4 rooms have wall paper!!
My Ebay sales are doing pretty good....Ive been surprised by it to be honest. BUT I need to move it faster so a flea market is in my future when the weather warms and gets more stable..IF the leak is stopped then I will go full steam ahead in the room Im now calling the library, that adjoins the dining room...a trip to LOWES is in my future!

This is so cute I have to share...
My mom is a lovely lady 88 yrs old.  Each morning we sit at the kitchen table and have morning coffee and watch the activity at the bird feeder...

My mom drinks from a cup that is a souvenir from the state of PA. She decided to read aloud to me the facts that were written around the cup..so she read to me:
"The state tree is the Hemlock, and did you know its the Keystone State?"
"Yes I knew that, but I don't have a clue what that means."
She replies "me neither." then she continues...the state motto, and then...
"The state bird is the," here she pauses, then she continues ..."the ruffff..." another pause..
then.."the Ruffled Grouch."

I immediately broke into hysterical laughter and spurted coffee all over myself...she looked up and said
"WHAT?"
IT was just so funny and I laughed all day off and on, each time I recalled her saying Ruffled Grouch..instead of the Ruffed Grouse...she had it very close I think I ruffled her feathers by laughing but it was such a cool mistake, it was one of those moments..in the end we both laughed...and that brought to mind another story..

My sister and her husband traveled to Yellowstone park one yr, and they called to give us an update on their trip thus far, and I listened to my Mom's end of the conversation as they recited to her the list of animals they had seen on their day in the park...Mom recited each one out loud so I could hear what they were seeing so as my sister said "buffalo" my mom repeated toward me, nodding BUFFALO, then it was Coyote, she repeated, then Moose, she repeated, then it was Western Tanager, my eyebrows went up in approval, and then she said
"OH , an ALBATROSS."
and MY EYEBROWS went down as I recited back...
"ALBATROSS, no way"!!!!!!!!!!!!!
(possibly only my bird-brain bloggers will get this as  a hilarious mis ID of some kind of gull, as the albatross lives its entire life out to sea)... 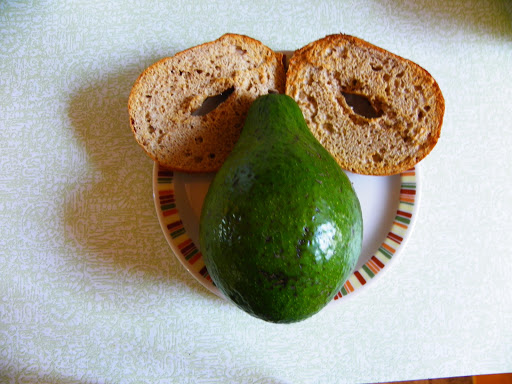 this  could be a ruffled grouch? 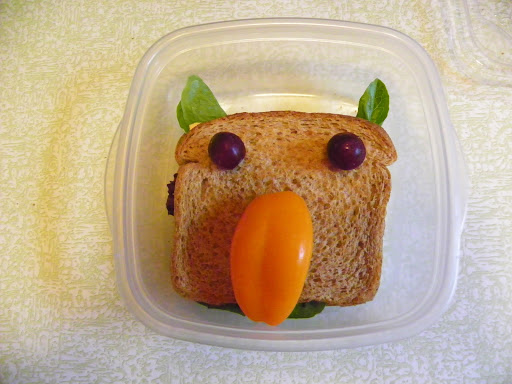 and this was Lunch!!!

Found a P-nut, It was rotten!

I'm planning to finish the repair to this floor this weekend! Thats the plan, if my back holds out...I dont mind working on a ladder, but squatting and stooping OH My aching back..
Here is the stage the floor was at last time..to refresh your memory...under 2 layers of carpet, there was a layer of old tile and under that a layer of 1/4 inch underlayment...held on by one zillion nails... 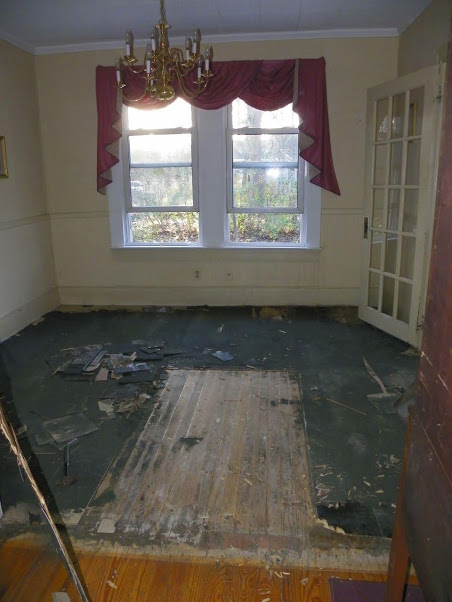 MOST of my PHOTOS got lost thanks to Flickr and a Hard Drive that messed up so the photos disappeared from this post...

NOW once I pulled up the underlayment over in that right corner...
SURPRISE I found a major ROTTEN SPOT! I dont know IF it was termite or water damage, there does appear to be water damage on the wall under the window, so AN improperly caulked window on the outside may be the cause, I have caulk to fix that problem and I have ripped out most of the rot,
The are is On the far right corner under the window....so I did a screen shot to show you the area 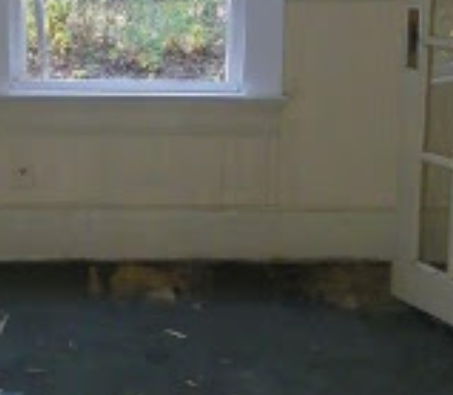 You can see the damage below the window to the paneling.... the SUBFLOOR too!
SO I have a plan whether it will work or not, your guess is as good as MINE all I know is I am going to try and do this!! I imagine it wont be perfect when its done but it will be better than it is NOW!   I will replace the subfloor boards with 1 x 6 treated and I've purchased 48 ft of pine flooring, but its 4 inch wide and this old floor is 3.25 inch wide..SO the boards have to be ripped down to the right width...I think Ill rip the boards first then cut the various lengths...I know the joints have to be staggered in order to look right so I will cut every other one to different lengths so the joints dont match up and create a line, YES Ive been watching THIS OLD HOUSE on PBS for years! NOW If I just had all the tools they have...For some reason the power tools mysteriously disappeared from the tool shed the week my X moved out although those items were not on his list...hmm

And here is how it came out with my patching in of the flooring...And I found a piece of paneling to replace the bad piece with.. 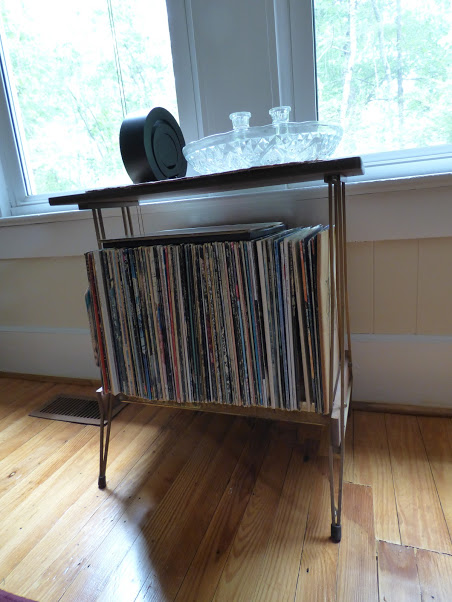 on the lower right

SO this is the other side of the room  its Great! Wish me luck and IF i can still move when its done Ill update with my progress!  I have also removed the carpet from the adjourning room beyond that glass door, its a small room that was used as a Home Office but I am thinking Library/Media Room! It had a built in window seat that I removed! I will try to remember to take photos i forgot the before's of that, its a blank slate right now.

The Ebay selling is going pretty good so far, IT will help to pay for some of the numerous repairs I have to do ....and the sweater man didnt contact me, so I guess he was pleased.