Casey and I had a cold night in Farewell Bend so we headed South this is where I made a complete navigational blunder! I had planned to go see Mt Shasta...but I found out about Lower Klamath NWR and Tule Lake NWR from studying the map so I left Crater Lake on the west side to find camping it was a short drive back to the  east side of 62 and then south down 97 alongside Upper Klamath Lake where I saw hundreds of Western Grebes !! Hard to photo due to a RR track and a Weird fence but I snapped this one.. 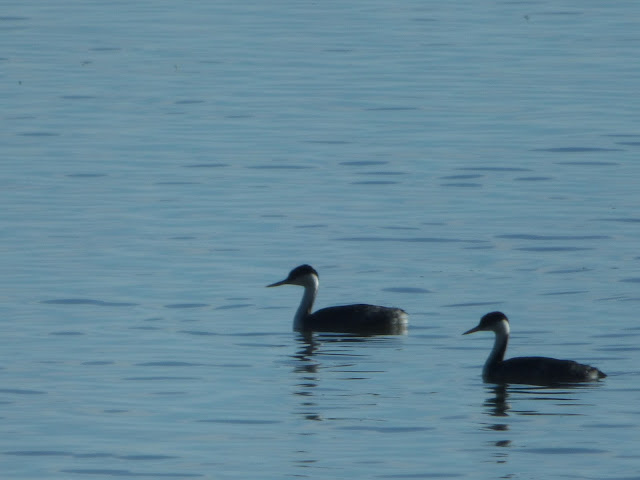 The problem was I saw no access for me to just pull over and really explore the lake with my binoculars so this and of course the almost always present american coots which are always a treat to see anyways!  I kept driving South on 97 and took 161 East over to Lower Klamath National Wildlife Refuge. 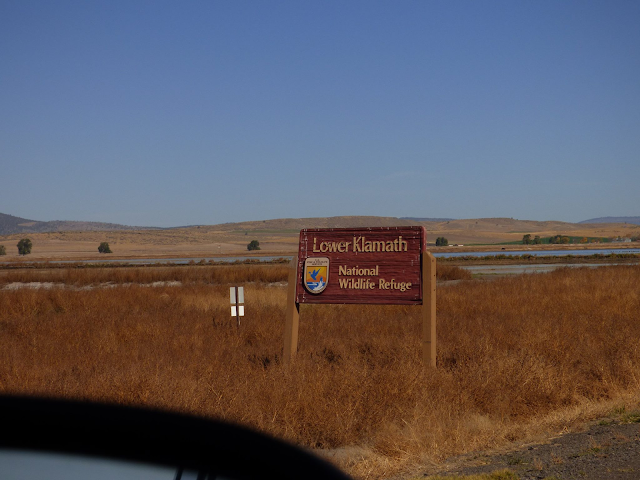 Which is in CA! Goodbye to Oregon...I sure enjoyed every single moment of it...and I hope to return one day to continue to explore the areas I was not able to visit and I'm sure you could live there your whole life and never do that!  This Lower Klamath is chock full of birds the numbers are amazing!! 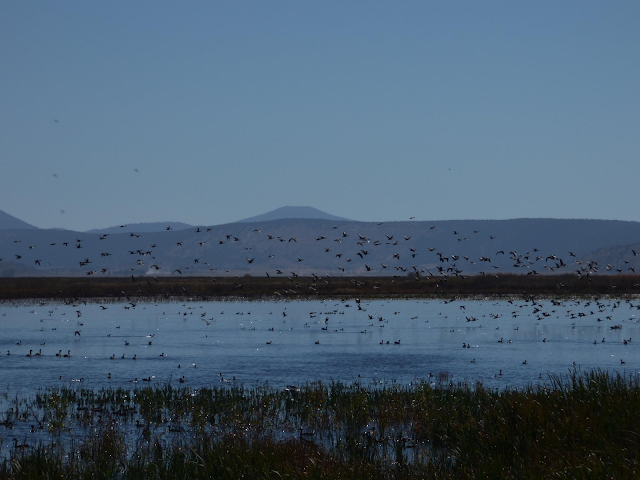 SO many species too...this is a mostly Northern Pintail flock...mixed with all sorts if anyone sees a duck I in this flock I have not mentioned let me know what you see!! Try as hard as I did I never got a really decent photo close up of one!  I drove down the canals and they would fly right away... 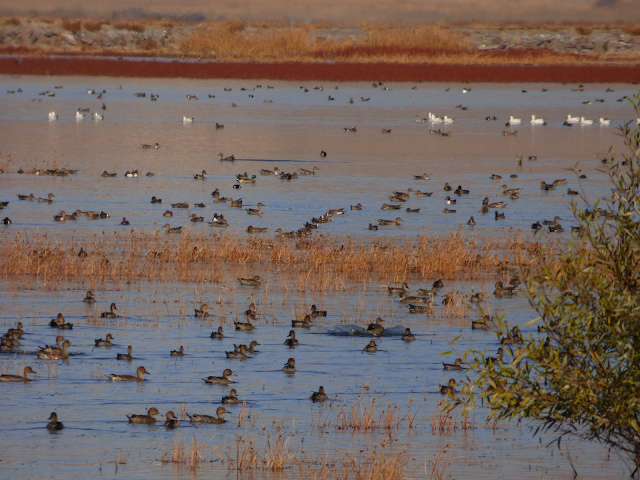 There was other wildlife to see as well... 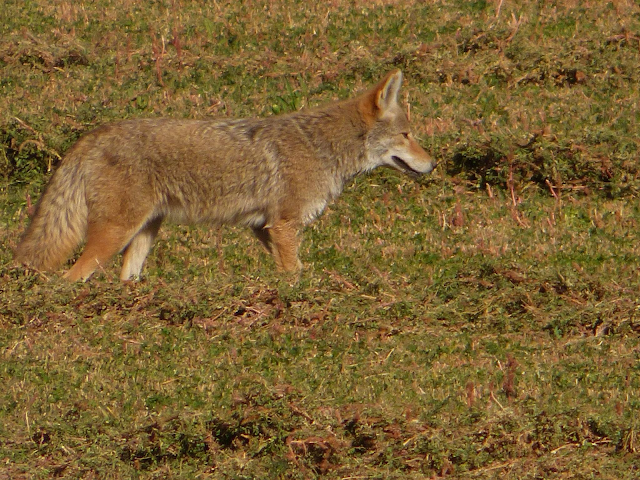 And I saw more Sandhill Cranes! 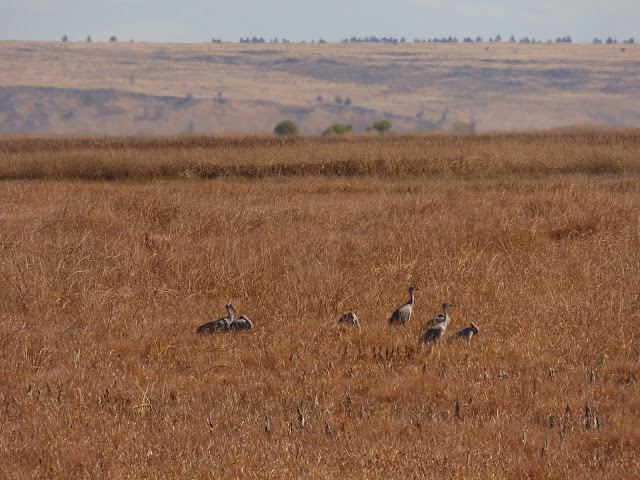 And I added the Cackling Goose, and in this same shot is the Great White Fronted Goose with the pink beak..

Northern Shovelers were plentiful I got this shot of a female. Still a bit grainy... 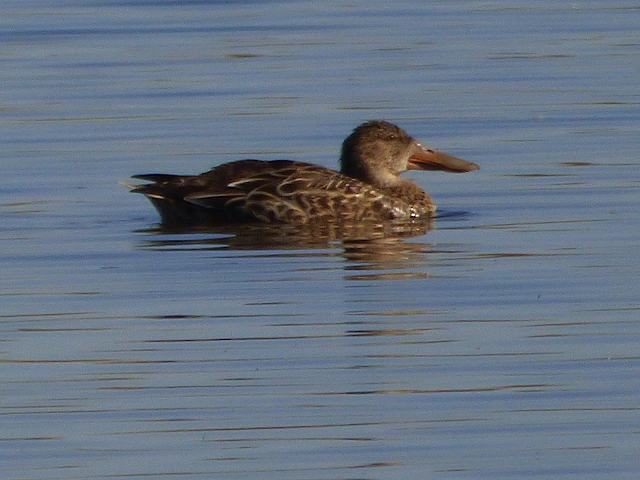 There is so much waterfowl there. This Redtail Hawk was not happy with me driving down the gravel road he was hunting on and flushing the hundreds of dabblers out of his way....he really looks pisst and he was screeching at me! 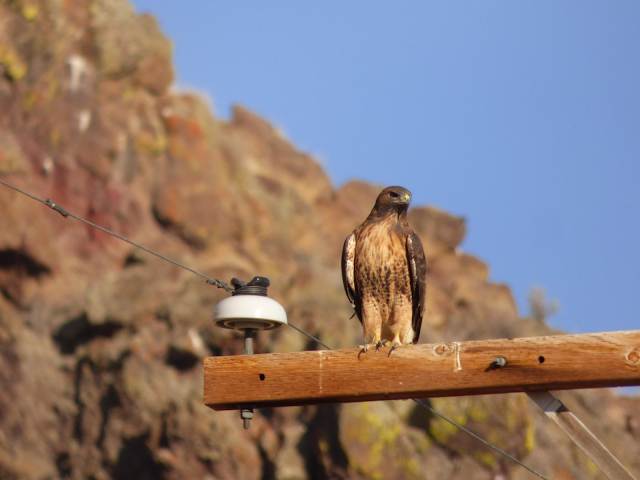 I also saw in this same area but got no photo of the northern goshawk! A new bird for me! I got a real good look but my camera was not in my hand and not even turned on when I took Casey out for a quick leg lift break...Im calling this next bird a pine warbler, until I am told different I couldn't pin any other I'D on this donkey so Pine Warbler it is! Thanks Jen for the correct I'D Orange Crowned Warbler

And lots of American Wigeon males and females were on the lake mixed in with the coots.. 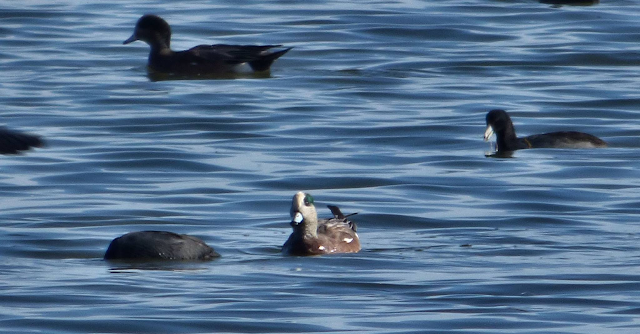 Brewers Blackbirds were around in numbers too...

The beautiful thing is Lower Klamath is basically on the way to Lava Beds National Monument...so that's where I headed for the night to camp. I ended up spending the entire weekend there.  I will report on Lava Beds later....another great birding area nearby is Tule Lake, 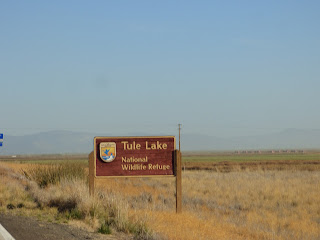 its located right by the Natl. Mon. So the next morning I left early and made my way into one of the photo blinds...BUT first I had to walk the mosquito quantlet!! The issue I had with this blind on Hill Road was none of the openings were for a person my height so I ended up on my knees...there were some openings 6 ft up and some 2 ft from the floor? SO strange...none at about 5 1/2 ft--the first thing I heard was all the shootgun blasts! Not what I wanted to hear...and hopefully none would penetrate the thin walls  of the blind while I was in there I spent about 30 mins in there...Once again Thousands of American Coots and Northern Shovelers, Northern Pintails, western Grebes, American Wigeons, Eared grebes, Mallards, White Pelicans, 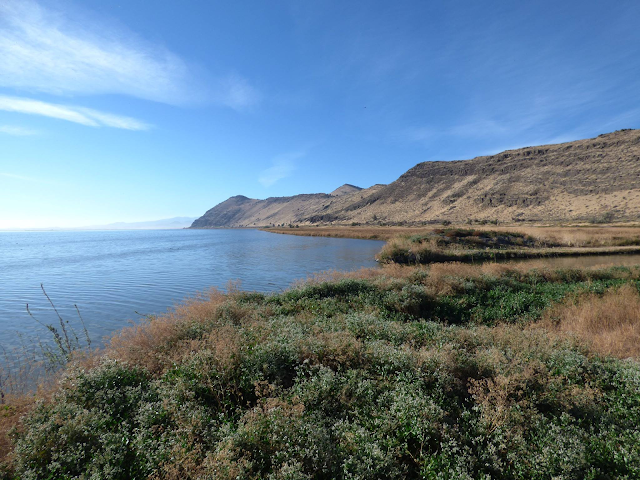 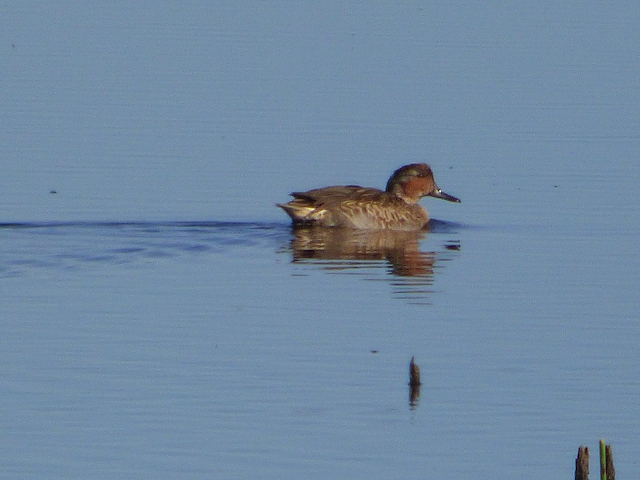 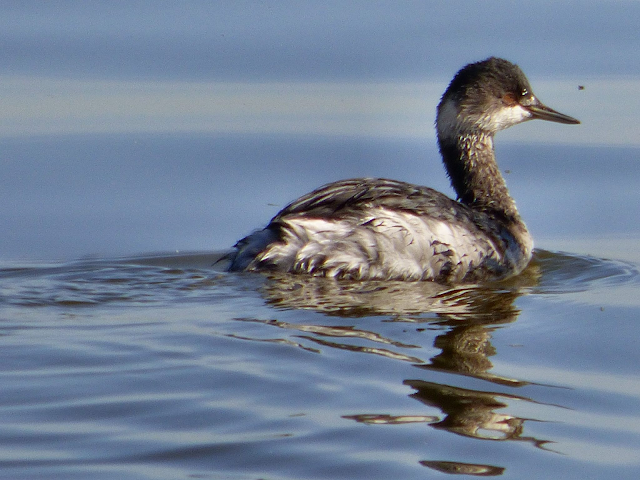 Eared Grebe
I was so pleased to actually get this shot of the female Rudy Duck.. 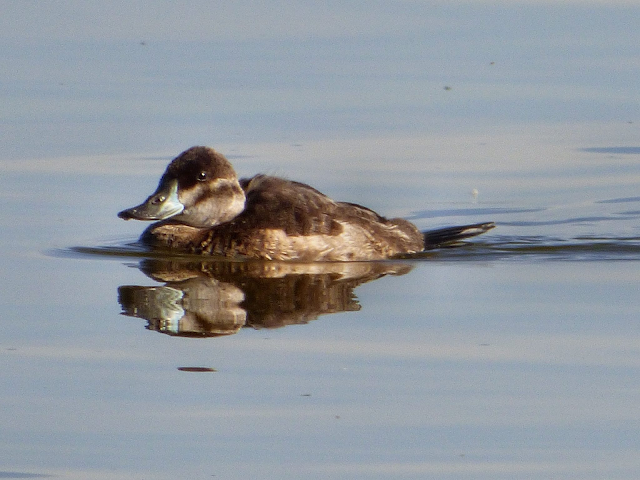 Found a cubby of  California Quail hiding in the brush.

The White Pelicans gave me an air show... 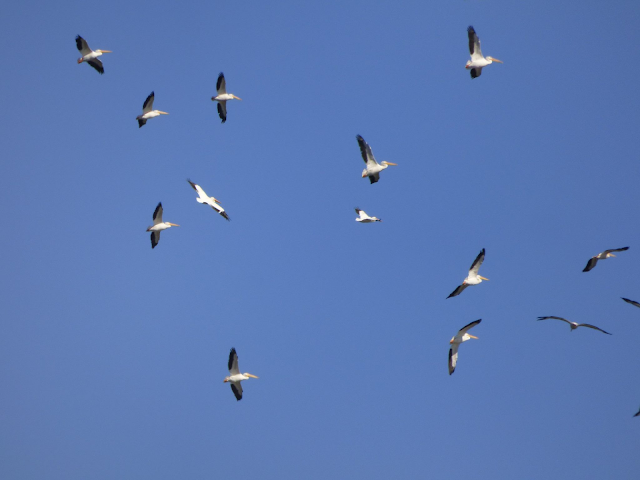 The snow geese were unsettled... 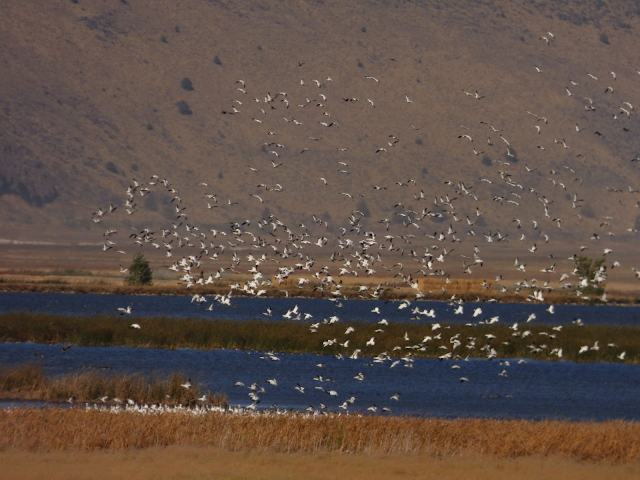 ANd I've never seen such a large concentration of Egrets some great, some snowy's as well.. 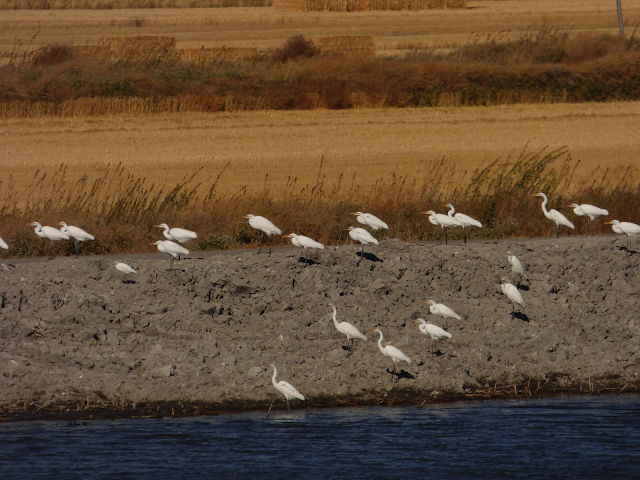 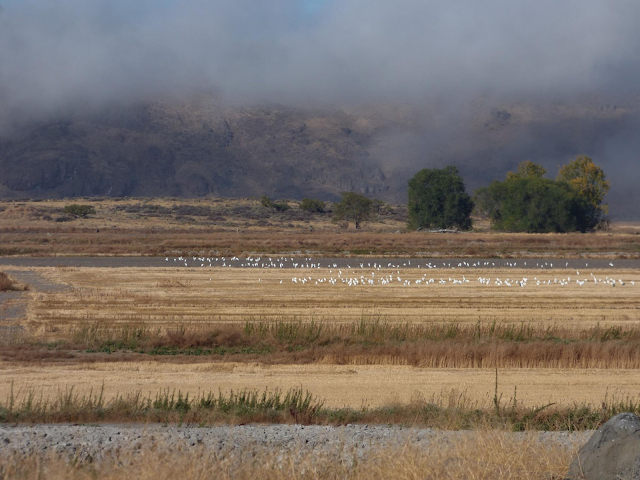 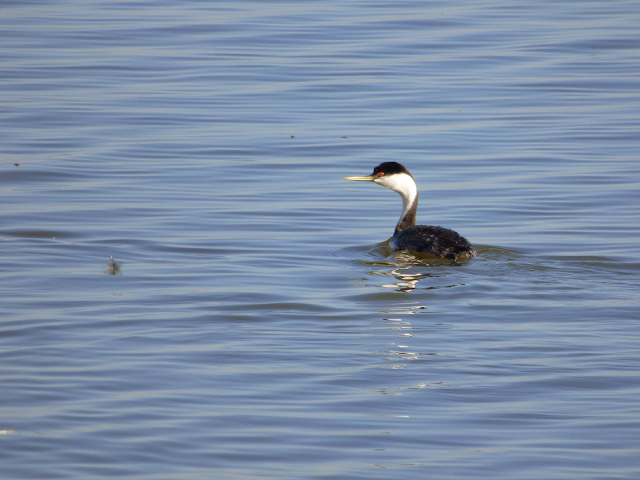 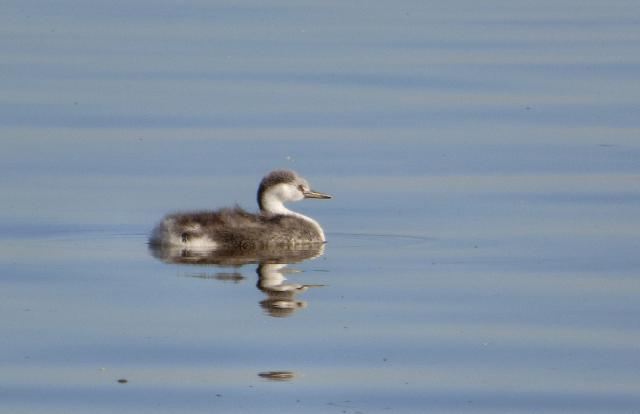 And I watched the White Faced Ibis pick up crustaceans for a meal... 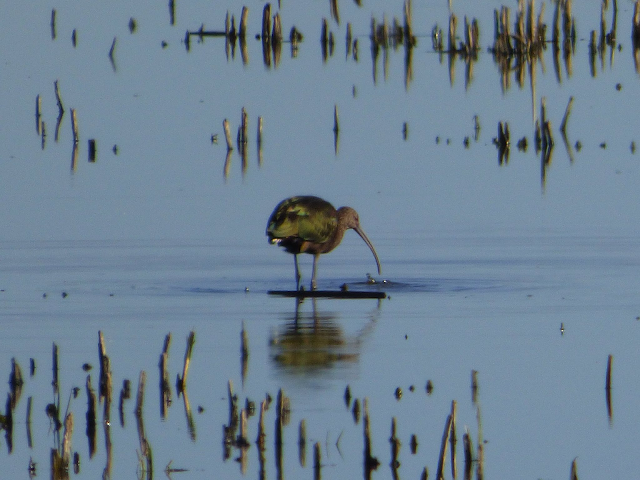 These 2 days of birding was fantastic I would recommend both these spots for migration and wintering water fowl!! Many of my photos are still unidentified and not really good enough to share! I will go over them with a fine tooth comb when I get myself back to SC. A bonus of being in this area is the natural beauty of the lakes...and the View of Mt Shasta!  I had a wonderful 2 days of birding in this great refuges...I only wish there was no hunting..that made me sad..:o( 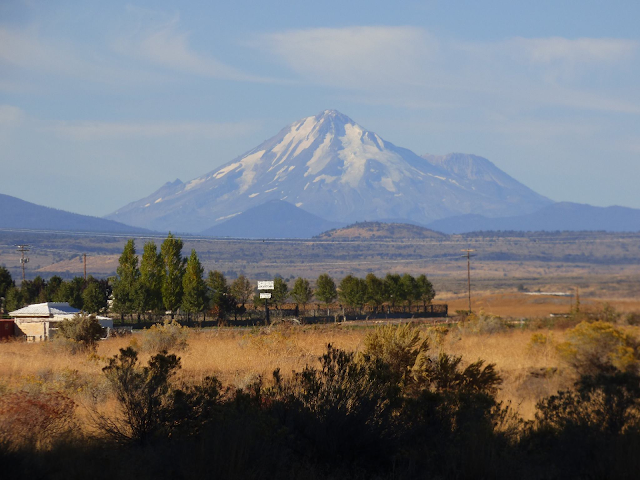 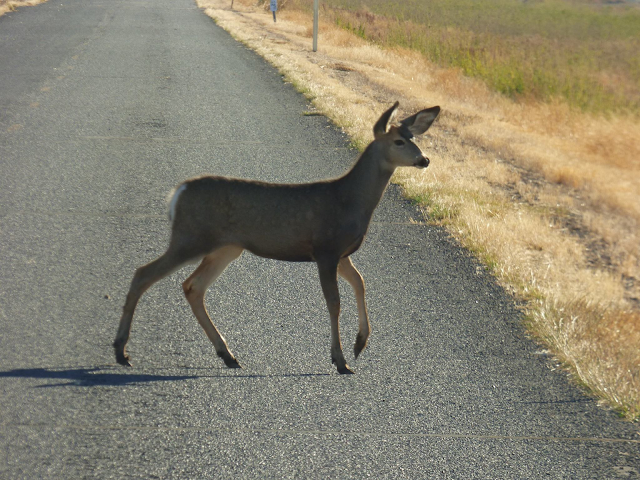 Lava Beds National Monument is my next stop and next post!