The Graveyard of the Great Lakes, Whitefish Point 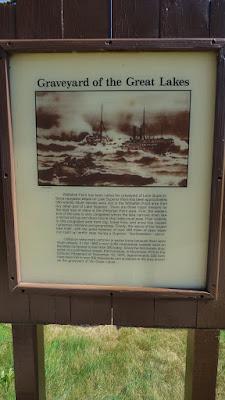 MY stay in  Tahquamenon Falls sure
went fast and while I was this close to Whitefish Point I had planned to see the Great Lakes Shipwreck Museum.  Whitefish Bay for some reason has been a mariners worst nightmare for some time...countless ships lay on the bottom of Lake Superior in this area and the museum is dedicated to these tragedies not all as there have been some 320!! I have enlarged this sign at the end of this post.   The grounds of the museum also is the site of the Whitefish Point lighthouse.

it is not a huge lighthouse about 100 steps up there but in it's time it warned many a sailor!  The cost to enter the museum, the theater, and all the other buildings is $13, but they want an additional $4 to go up the lighthouse...I didn't pay the extra, I got $1 off for senior discount..
I had Casey in the van and a cool breeze was circulating so he was fine while I toured.  There is a nice Visitors center with gifts, and fudge! I got my passport stamped also...this huge rudder is on display its from the wreck of the MM Drake 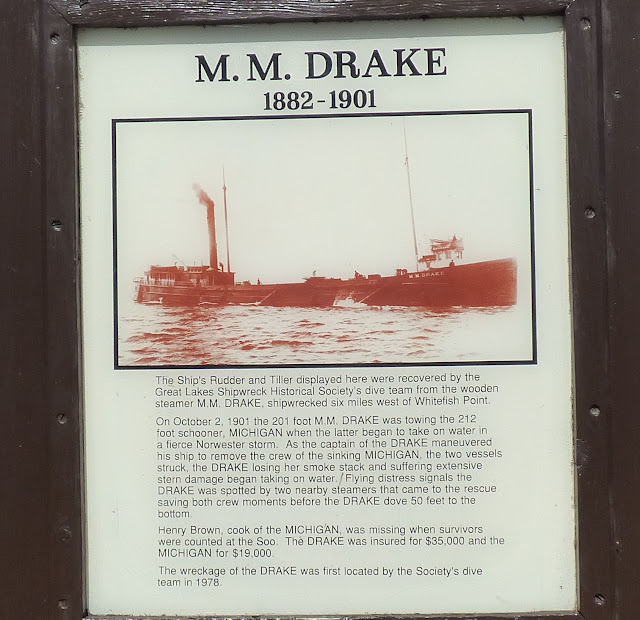 here is a shot of some of the bay at Whitefish Point...

One wreck that happened in our time was the Edmund Fitzgerald, as in the song made famous by Canadian Folk singer Gordon Lightfoot.  Someone placed this memorial to 3 of the souls lost there were 29 men on it when it sank in 1975. 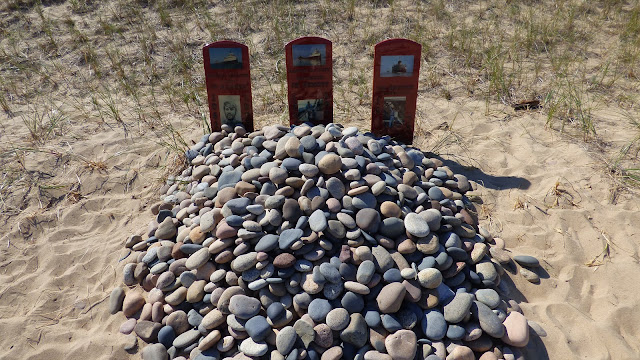 The Canadian's are the ones who went down and brought the bell of the Fitzgerald up and it is now in the Museum as a memorial to the men lost.  It was a horrid thing for the families to know their loved ones are still down there! In fact now this is gruesome but the guy who was in charge of the theater told me that the bodies of many of victims are still there just floating inside the wrecks since the water stays right at 32-33 degrees F! The clothes are long gone and they look pale and milky from being in the water but still intact!  Only 2 crew have been discovered off the Fitzgerald tho that I am aware of.
Here is the Fitzgerald she broke in half but is still pretty much as she was the day she sunk!  This was taken one yr later. The ship was carrying 26,000 tons of iron ore on its way back from Wisconsin, when it was hit by a Nor'easter...the Captain contacted the Anderson who was behind him several miles and told them he had water coming in and the pumps were on...but it was still listing, then a huge wave is what is believed to have  broken the ship in half and it sank..

This is a replica of the ship and the suit worn by the divers who went down and got the ship's bell.  The movie they showed us was about the salvage of the bell and in place of the bell they mounted a bell engraved with the names of the 29 men who went down with the ship where she rests. The Captain's last words to the Anderson that night was "we are holding our own"

The exhibits show the remains of many ships sitting on the floor of Lake Superior! Here is the Vienna she sank in 1892! 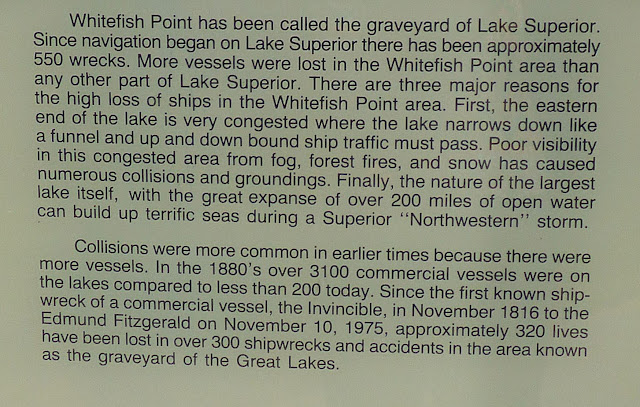 the film brought me to tears as the family was so stricken by the sudden loss of their loved ones...it was heart wrenching...

"does anyone know where the love of God goes when the waves turn the minutes to hours...
Superior it's said never gives up her dead when the gales of November come early"
Gordon Lightfoot.

PEACE
Eleanor Roosevelt: You must do the thing you think you can not.
at 11:19:00 PM