From Snow to the Sand

Sorry I'm being such a busy poster, while I have internet and time in the evenings it's convenient for me, my time here is short so if I'm unable to post the next couple weeks as my travels continue maybe I won't fall far behind with my chronicles, so in continuance of the 3 day and 2 night camp trip here we go.

Stunning scenery along the way... 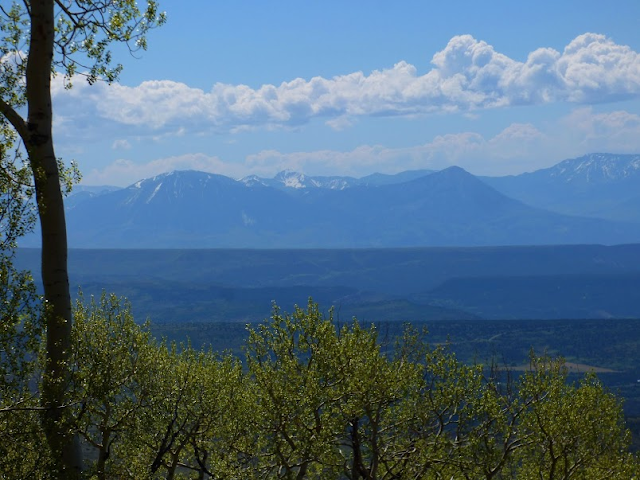 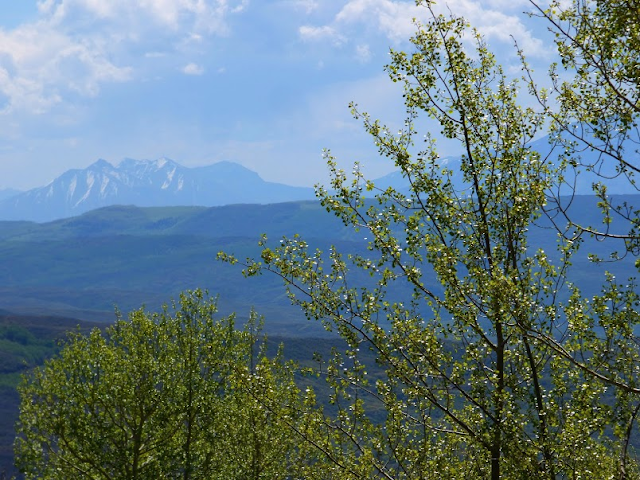 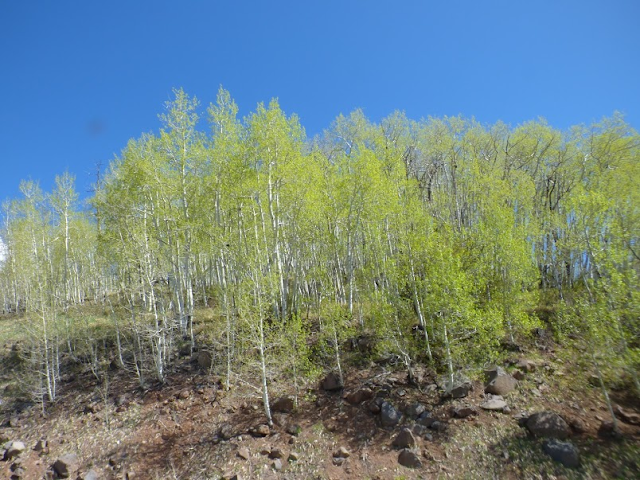 Saturday Apr 19th.  Since the Southern side of the road off the Grand Mesa travels right through Orchard City I wanted to see if any new birds were at the Fruitgrower's Reservoir.  The big lake had a few Western Grebes, Canada Geese, and a couple of Bullock's Orioles. 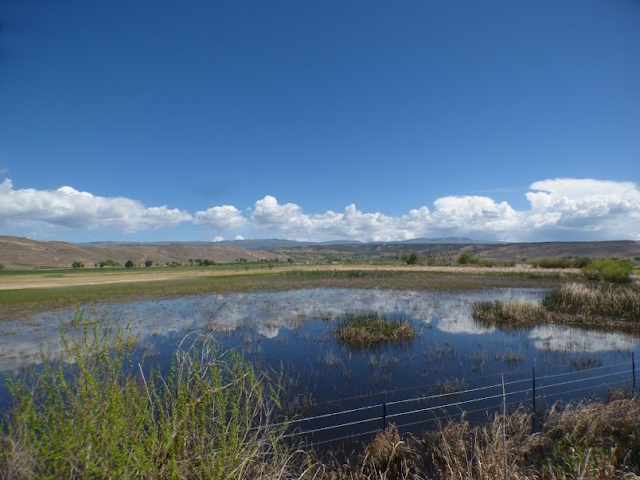 Up on the north causeway there was a bit more to see. 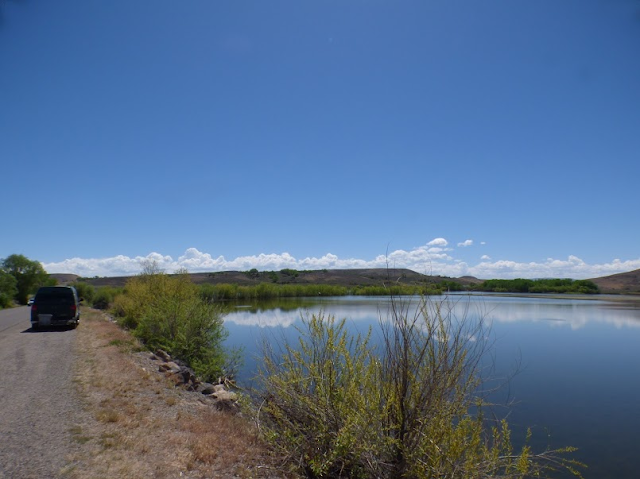 The shorebirds I had hoped for were not there but still some good things to see.  Most of the Ducks and Geese hung across the lake on the far bank....but this pair of Western Grebes were so busy adoring each other they forgot to move away from me... 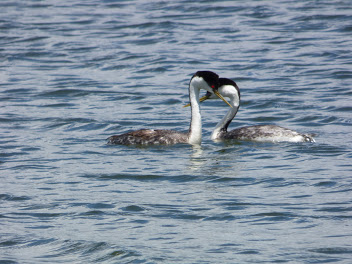 Keep hoping for a Clark's to be in one of these flocks....only one Long Billed Dowitcher was poking around... 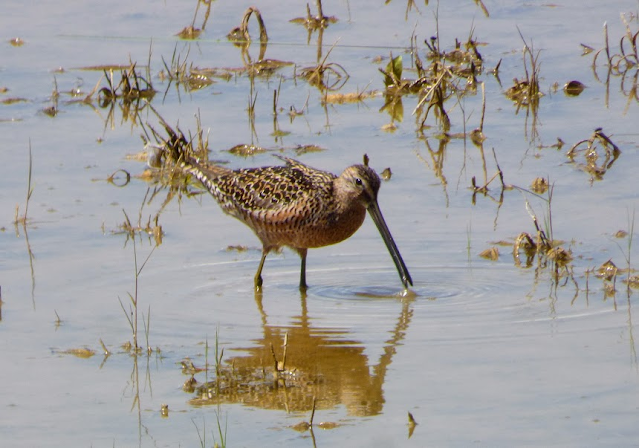 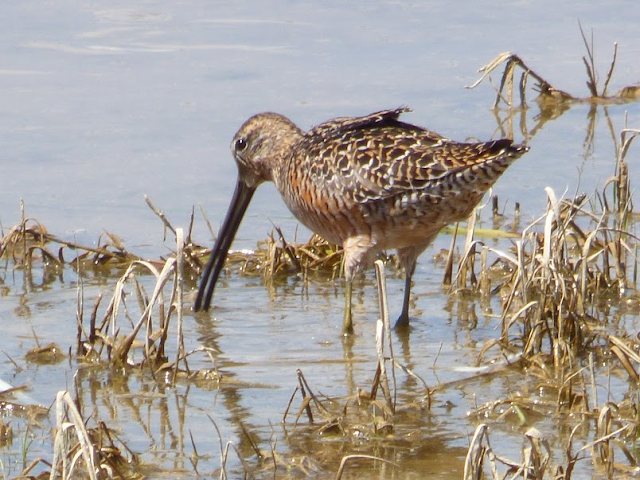 ...along with 3 Spotted Sandpipers was this young Ring Billed Gull... 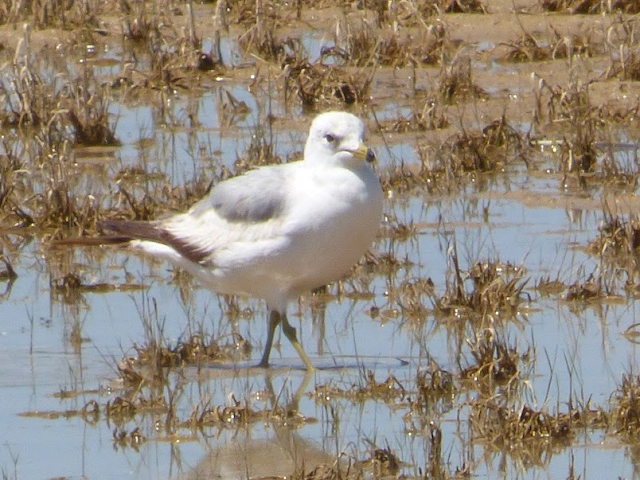 And a California Gull 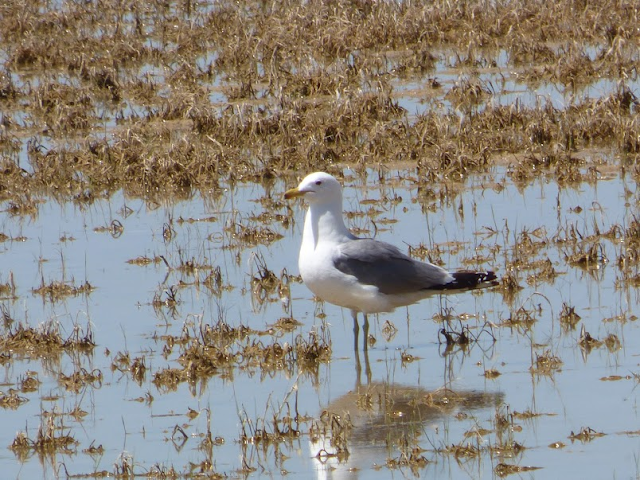 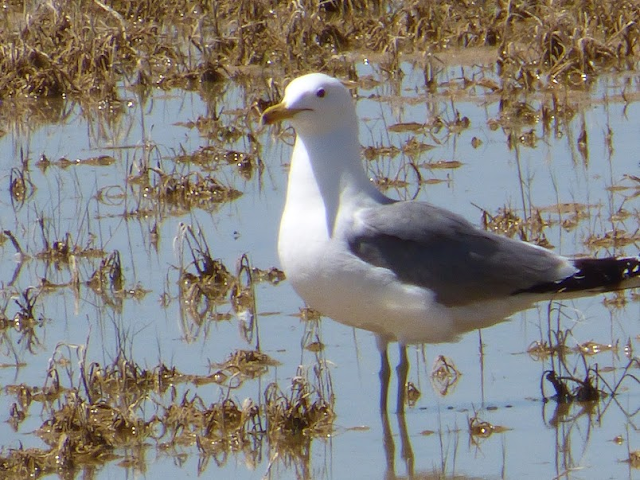 Check out the size difference between these White Pelicans and the tiny Pied Billed Grebe...just to the left of the pair. 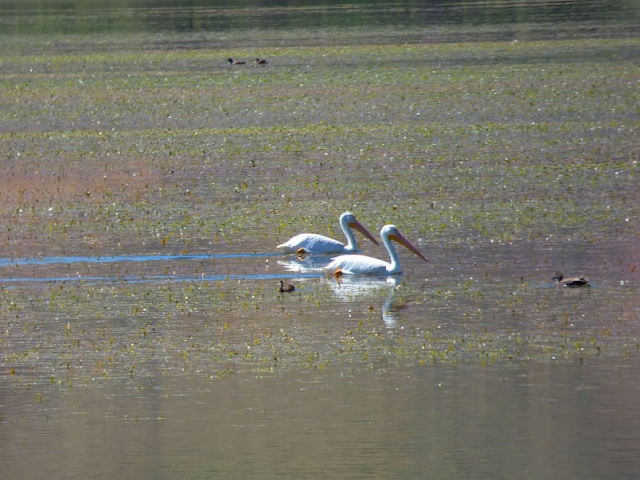 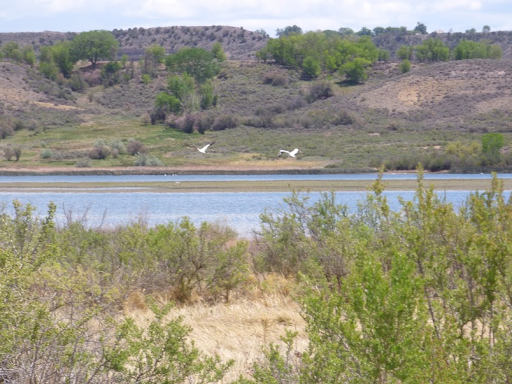 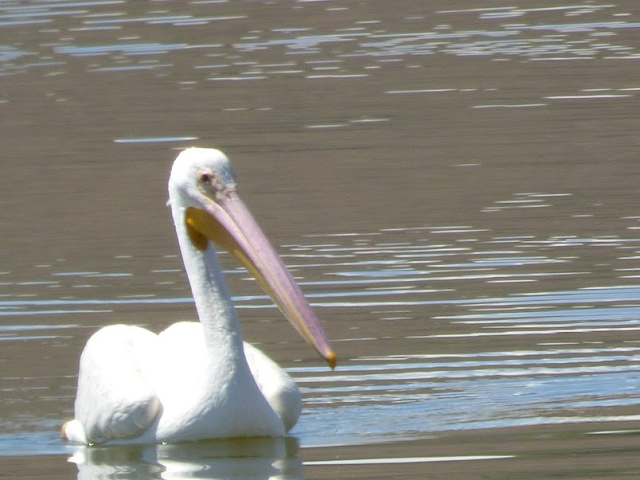 I took a walk closer to the marsh where the Yellow Headed Blackbirds stood out so brilliantly! 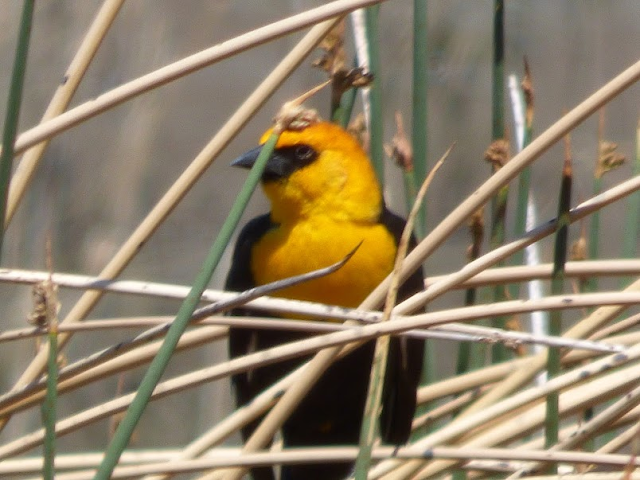 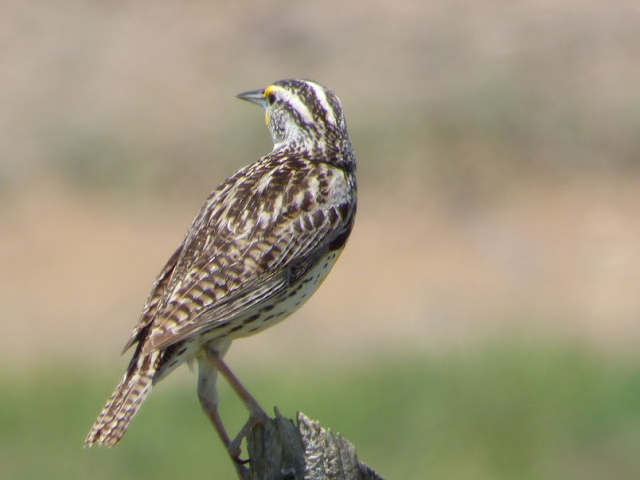 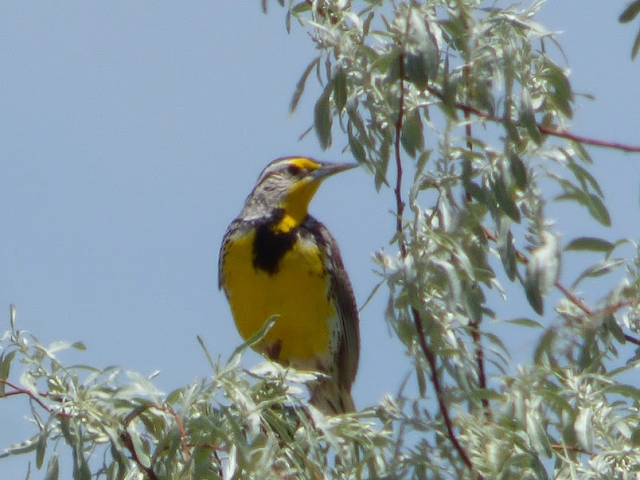 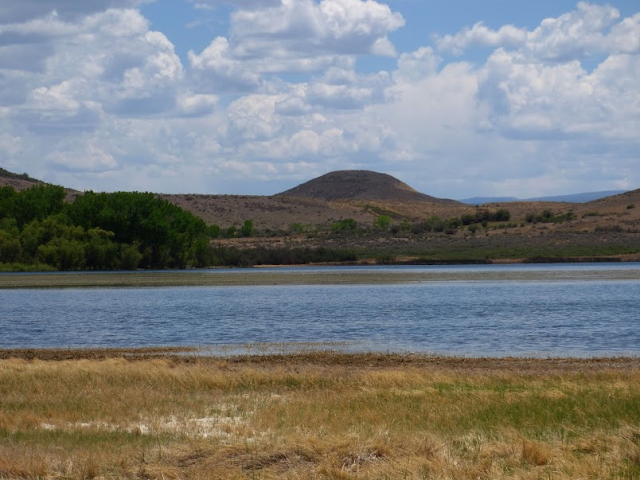 The plan was to return to my sis's house by evening and I had one more stop planned and it was a bit of a drive so I made my way toward & then about 11 miles west of Grand Junction.  Since I was pretty close I wanted to revisit
2 and 8/10 road near the settlement of Mack...where I was about a week ago near the McInnis Canyon area.  I arrived there about 3 pm. 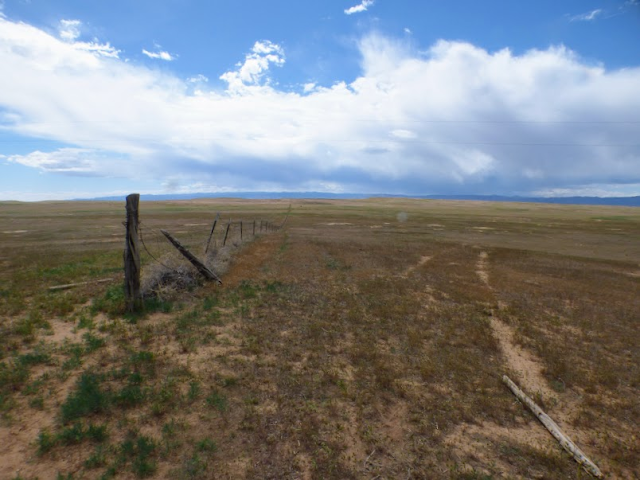 I know this does NOT look like much, but it was my destination!
Just a fence in the desert right? But look closer!!  Count from right to left 11 fence posts down... 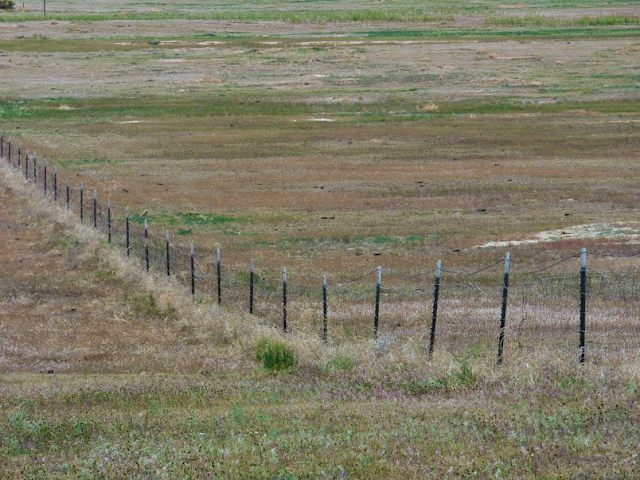 Finally!!! I get to add the Burrowing Owl to my life list! 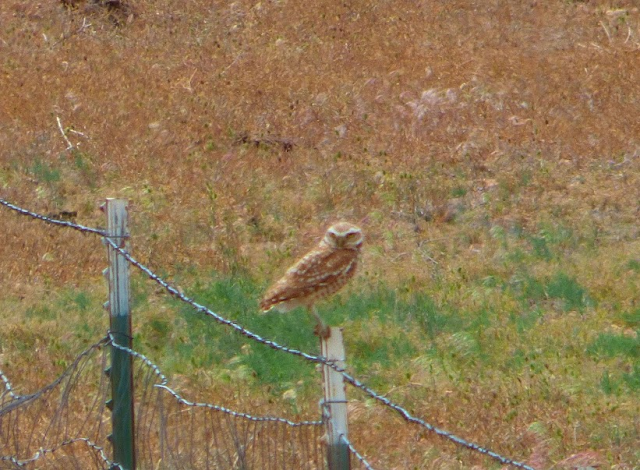 AND he is a real beauty...what a treat. Look at those eyes! 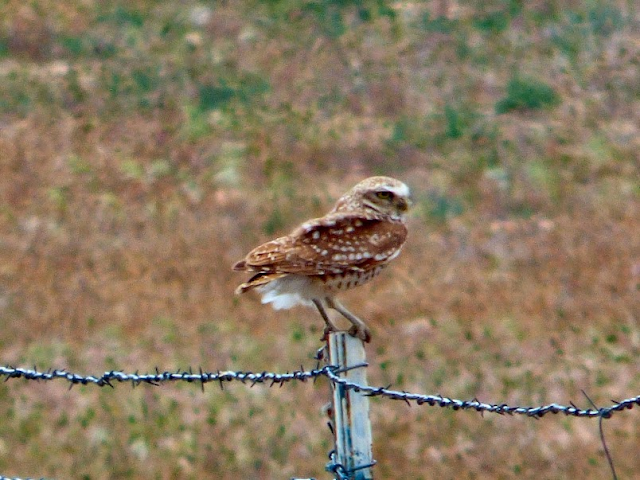 He flew off the post and back a couple times, and then eventually to a prairie dog mound, and he got out of camera range.  I was able to watch him for about 20 minutes and then I left him to do his thing.   Been trying to see this bird for a long time! My Owl list has been hurting for a while because I was not trying...now my goal is to add more by working harder at finding them.
I've seen only 7 of the 19 possible in North America.  I had high hopes of the Boreal Owl up on the Mesa, also the Northern Pygmy, and the Northern Saw Whet  and of course the Western Screech.  They are there but I was not able to spot one.  It just means I have to try again and try harder.

I had a great camping trip and this was the perfect end I added 3 new birds to my life list...and an unlimited amount of wonderful experiences.