So yeah Im about to rippen to Gold!! I havent mentioned any of these plans cause I don't want a jinx to come along...Im knocking on good wood as I type!! You do know I'm highly superstitious right?
Meanwhile I've been getting work done on my van I call it the DixxeLand Express...or DLEX for short...the reason for the name is DixxeLand is an imaginary world (created by me) in which all my dreams come true, my old by-line, maybe I'll go ahead and change it back---My vanity plate is on the front I designed it myself!  It has my 4 directional compass on it  I had it made at an online plate airbrushing company..And DixxeLand is the title of my blog, the name is My Life My Art...anyways blah blah blah lol.

For a year my son had my van he never does ANY maintenance/upkeep I guess since he was raised by me who does everything (psychology?) so the cover of the plate is now smashed and needs to be replaced! Anyways I've been busy fixing up my van as best I can...Y'all know the horror story of the tune up.... But I finally did get it done...another thing  I needed some tires SO I got some I want my van to look more like a travel van and less like a  snatch n grab molester mobile of some sort, I dare not ever cruise slowly behind anyone walking on a lonely road...Got the tires they are not top of the line they are however top of my budget line! other issues: the speedometer, the odometer and the cruise stopped working about a year ago and the A/C-heat-defrost- blower runs only when it wants to!! I YOU TUBED everything I could think of to get to the root of the issue of the cruise, speedometer, odometer thing the do nothing garage that was supposed to check it didn't as you know! One video said it could be the Transmission Speed Sensor...So I changed that---didn't help. I had the rear ABS sensor replaced...as that is the code that kept coming up...Didn't help.  OH WELL this thing is gonna nickle and dime me to death!

...remember when I put the trailer hitch on the van? I saw how rusty the rear shocks are so that's on my Fix It List too,  I think I can do it myself!! ITS Not rocket science, its 4 bolts, (struts on front another story). So in preparation of removing those bolts I decided to buy some Rust Buster and blast it onto those bolts hoping this will make it easy to remove then when I attempt this job--
SO today I put my tarp on the ground and crawled under to spray the Rust Buster.  Looking around I see this red wire sticking out of of a wire harness and its broken---I traced its route to the ABS Speed sensor on top of the differential (the rear axle)

...so simple a first grader could do it ? 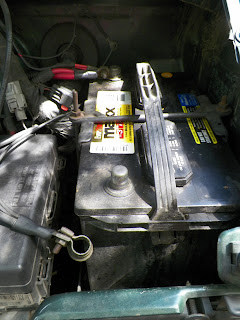 Holy Cow could it be this simple? SO I cut a piece of wire off my utility trailer's old lights its all broken and I need to rewire it...About a 5 inch piece I stripped the ends spliced it into the red wire that had a white wire with a purple stripe bundled with it. I disconnected the negative battery cable of course before I did any of this!! I twisted up the ends of the wire and put some electrical tape around the connections pushed it back up into the wiring harness where it had been ripped from..I honestly think A Squirrel chewed this wire because they are always messing around under my van!  When I see them I go out and chase them away. 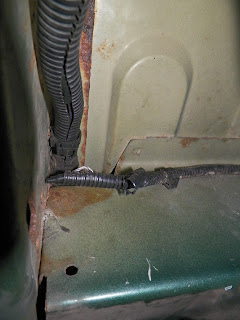 So once I had the wire tucked up nicely I reconnected the battery cable and backed up the needle moved slightly!! WHAT?  SO When I put it in Drive and sped off down the road, IT WORKED, so did the odometer, and After I remembered HOW to turn on the cruise it worked too!! One red wire the size of a piece of spaghetti stressed me out for more than a year!!

Now onto the A/C problem...I blew my monthly Data allowance to bits You Tubing this problem...I do think it could be the ignition switch Because some times the windows don't want to work unless I jiggle the key in the ignition...when I first bought this van I took it to the "stealership" they told me the blower motor was bad, they changed me over $400 and then when my son had the van for a year in 2013 it went out again , he never told me so...I'm positive its a similar issue on this blower..some contact is not making good contact! Sometimes  you turn it on it blows sometimes it wont its hit or miss! OH and this is the same "stealership" that charged me $84 to diagnose my Speedometer problem, told me they had to open up the differential and drain the fluid and then see what's wrong with your diffential!!! SO did they know about the red wire and intended to rob me of even more money or what? NOW you tell me what kind of garage can be outsmarted by a 62 yr old woman??? (a shifty dishonest one thats what!) Of course I never went back for them to dismantle my differential as they estimated it to be another $400 job..it took 20 mins a piece of scrap wire!
A cosmetic thing I'm doing is the clear coat on the fiberglass top has peeled and shedding! SO I scraped it off and plan tomorrow to spray on new coat of paint and Clear Coat!  I'll photo the results when that's done...I should have done a before but here is after I scraped: its dull and has no luster so wish me a good day tomorrow for auto painting and detailing...Should I get some of those orange flame stickers to go down the side or maybe golden ones? 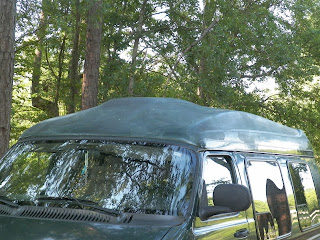 There is no way to be assured you won't have any problems when you're on the road but fixing what you do know is wrong may slant the odds in your favor.

CAN'T wait to get GOING.