Thursday I drove upstate to Greenville to dog sit for my Sis thru Sunday morning...so Friday I enjoyed a day trip up to Pickens County to hike to the Twin Falls- It was a bit too hot to hike but if I wait for the weather to be good I wont be going any time soon..its not as hot here as back at home.' 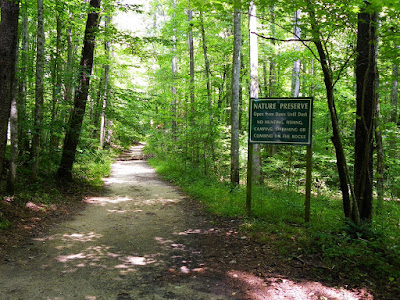 Keep your eyes on the trail 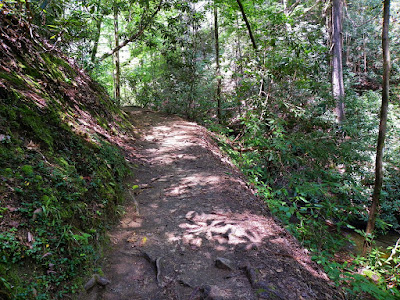 there is always a bright spot in the woods! 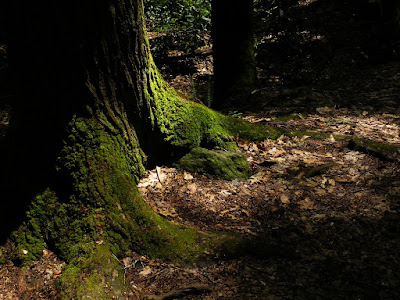 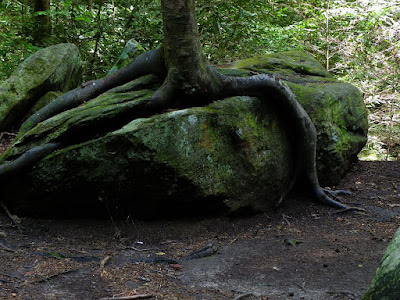 This rock reminds me of Stonehenge...well sort of.. 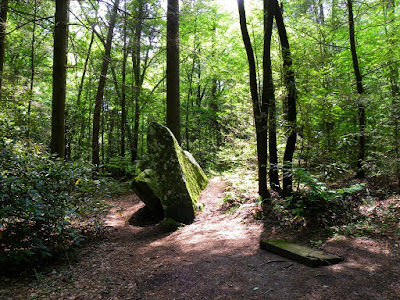 IT was such a thick forest but the stream followed the trail so it was easy to cool off just get close to the water!! 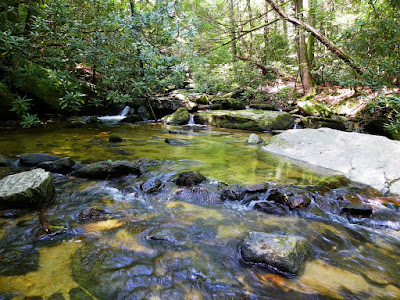 The water was really cool..and shallow so easy to spash in 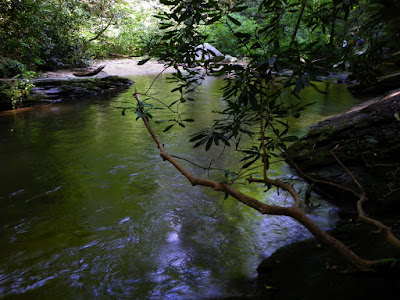 Then I arrived at the water fall it was super!!! I had the whole place to myself for a while...but soon a few straggled in this waterfall is off the beaten path, but not a hard or long hike.

But I wanted to get closer so I hiked up the rocks to the base of the falls...got that nice cool mist on me, felt great!!


Out on the rock I found all these Yellow Swallowtails sipping water!! Bet it taste nice and Fresh..

I took a ga-zillion photos..and these are my favorites made in slideshow!

Things I found along the way...

I wanted a hat to take with me to Arizona back in May. We are lucky to still have a Roses store in our town..I love to go there you can still FIND A bargain...So they had straw hats...I know that straw hats in Utah go for about $25 each. ( I am thinking it would be smart to set up a straw hat kiosk on the streets of Moab), I can buy them at Roses for $3 each!!! BUT I was being extra frugal and decided I'd use my little green Frog visor instead...so I packed it and left with no hat...

When my friend and I were driving along the Apache Trails By Way..I saw something laying on the road in front of the car so I pulled over, opened the door and whadda ya know A HAT just my size!!!! I inspected found it to be free of koodies---and plopped it on my head!! Isn't it a beauty? LOL, well you can tell I am need a HUGE MAKE OVER--please dont report me to the fashion police!

I LOVE wildflowers!! I take lots of photos of them, half of them I have no idea what the common name is...let alone the scientific name...Diana told me this one up there is Globe Mallow and Im trying to find out what others are called, a few I do know but most I dont have a clue...I try real hard to figure it out, going online and doing comparisons! I need to get a Southwestern Wild Flower Field Guide..if you have one you want to get rid of.... hey, I'm ready to receive it---I believe in ask and receive, The Law of Attraction, and it usually comes thru, sometimes its not right that moment so dont give up...just be patient and BELIEVE-if you dont believe in yourself who will?

I may have posted some of these before but I wanted to post them as a group, I am trying out this slide show to see if it works...

I dont have a digital photo taken by me of a buffalo!! Thats kinda sad....I saw recent blogs with photos of Buffalo made me smile..and it brought to mind the whole plight of our American Buffalo. IF we do nothing can we learn from the Buffalo, the Eagle, and the Wolf, that nearly killing off an entire species is a big mistake! The balance of nature is so precarious.
The great grasslands of this country are disappearing. Most of it is being plowed under to grow more subsized corn and wheat and up until the recent mortgage bust large tracts of grasslands were being developed with cookie cutter homes, and urbanization blight--

Our grasslands are dependent on an ecosystem that was in place before white men walked on the North American continent. Buffalo is a grazing and herding large mammal. They travel over an area and graze it, and while they do this they disturb the ground, and they distribute manure, and distribute undigested seeds... and this makes the ground more fertile. Once a herd moves over an area an inborn knowledge tells them to turn around and go back, the clipping they gave the grass, the fertilizing and reseeding will nourish that land and provide even better grazing, so 2 weeks later they will circle the herd and come back and re-graze the area. This is what kept our grasslands fertile and plentiful without man's interference for centuries. Then disaster struck and the herds were decimated for sport and profit. The grasslands began to shrink..although you may not consider it, the westward movement of the railroads provided the means for the demise of the buffalo herds and the Wolf, as well as the Native Americans.

The Buffalo kept the grassland revitalized and the death of the buffalo began the death of the prairie grasslands. Along comes a possible savior and whammo again we seem to be ignorant to the importance of this animal in his natural habitat!! Cattle are not native to our grasslands! They were brought in, most of the public lands are managed by the ranchers and the Dept of the Interior...who seem to be in bed together on every issue that pops up from the Coyote to the Prairie Dog.

This native species is a very beneficial animal in the grasslands of this country. It may appear that they only make holes and ruts in the earth with their many tunnels but in reality, they are bringing minerals and nutrients up to the surface, aerating the ground, reseeding the grasses, and fertilizing the soil! While cattle are moved in and out of areas by man....thats not a natural process...cattle are not NATIVE to North America but the buffalo are/were therefore we know that Cattle can not sustain the proper ecosystem balance!!
Prairie dogs can! They may not be as efficient as the Buffalo, but their colonization acts as a natural fire barrier, and the burrows provided homes for other species such as the burrowing owl! When prairie dogs relocate their dens, the areas left behind flourish with wildflowers and an abundance of grasses and become a balanced ecosystem again. Areas where Prairie dogs are killed out by ranchers, sport shootist, and other ignorants lie dormant and instead become spots of erosion and very little growth, the natural cycle has been disrupted as it was by the giant grazers, the buffalo. The prairie dog is doing what the buffalo did a century ago, but it takes some far sight to recognize the good the prairie dogs are doing. this one below does not look healthy, probably a flea infestation.

...I saw the grass was more lush, more wildflowers were growing and I personally believe its due to the prairie dogs replenishing of the compacted soil around the school house...and along the bike path. They used to mow the grass there but now they dont cause the prairie dogs are living there!! The grass is returning to its natural state-

Some people are starting to see the light and instead of putting out poison as our Federal Govt subsidizes doing, they are actually dusting prairie dog dens with flea killer to protect the prairie dogs and help kill out the fleas that are carrying the plague. Prairie dogs are not the bad guys in this just as the WOLF was not the bad guy. They need protection just as the Buffalo and the Eagle did--we have to learn from our mistakes otherwise what good are we as stewards of this Planet? In this case and every case Mother Earth Knows BEST!

In many areas prairie dogs are being murdered with the blessings of the US govt. They are being irradicated with the threat of spreading the bubonic plague, due to flea infestations. They are not being protected and the beneficial work they do is now starting to be missed on the ever shrinking grasslands as they move westward looking for a place to live.

I have seen the work first hand. Near my sisters home in CO is a an old school house. It is right next to the Rio Grand Bike Path, a rails to trails reclaimation recreation area. In the past 20 yrs that Ive been visiting the area I have noticed that Prairie dogs have begun to thrive along this bike path and in the area of the old school house. This year I saw pups out playing in the grasses, and I saw something else...
at 10:27:00 AM 2 comments: Links to this post

Ive got about 2 or 3 more story ideas to share from my trip...One is my trip thru Moab one of my favorite small towns in Utah. This is my third trip there and each time I find another reason to come back again. I finally got to go inside Tom Tills Gallery this time and I purchased 2 close out prints and one photo book of Zion Canyon since I was gonna be visiting the canyon a few days later...Tom's Gallery is awesome!! I enjoyed viewing all his work he had on display...he was not there at the time he was out of the country on a photo shoot-

I always love to take the drive along highway 128 out of Moab on my way up to I-70 to get to Colorado... The views are super...but right outside town is a bike/foot bridge that crosses the Colorado and there is a boat ramp just down from there and access to the water.

I walked across and found this lizard sunning on a rock, then heard a car screeching to a halt near me, and out jumped 2 big dogs who immediately jumped in the Colorado and went swimming!!

they belong to Erik who told me he worked at Harvard for 10 yrs now sure what he did...I only accepted information he offered, he was a bit crusty but a colorful character and he loves his dogs!!

This area is chock full of beauty, there is ranching, recreation, and movie filming going on here! I happened up on a movie set while driving on a backroad in the Onion Creek Area!! All I can tell you is it will be a western movie...I saw men on horses dressed in Western garb...BUT I didnt have my camera ready to get that shot..the security gave me a hard look and waved me on, but I did get my camera and snap this shot of a couple of their trucks..I had no idea it was a movie location set!! I was out sightseeing and doing a bit of off roading..lol

The road leaves the river behind near Cisco and the landscape opens up to wide open views the wild flowers were awesome!

I dont know what these flowers are...here is a close up..

And then here it one alongside a Mariposa Lily!

I know this is a stretch...but I love this straight road and the destination is awesome!!