Sunday Jan 19, 2020.
...reading Mom's journals this afternoon she had a gift...It's cold and windy so I'm inside after getting my wood in for the night.  I plan to watch Colombo later, that is my normal Sunday night thing to do after a simple home made meal, tonight: rice n bean burrito and tossed salad.

One of Mom's Journal Entries.

9/27/2005
"This is my sixtieth wedding anniversary. Happy Day H.B.  I am sitting here all alone...but me and Jesus been looking at the trees, so wilted for water. So I asked God for much needed rain to stop their tears, so they can play music again..." 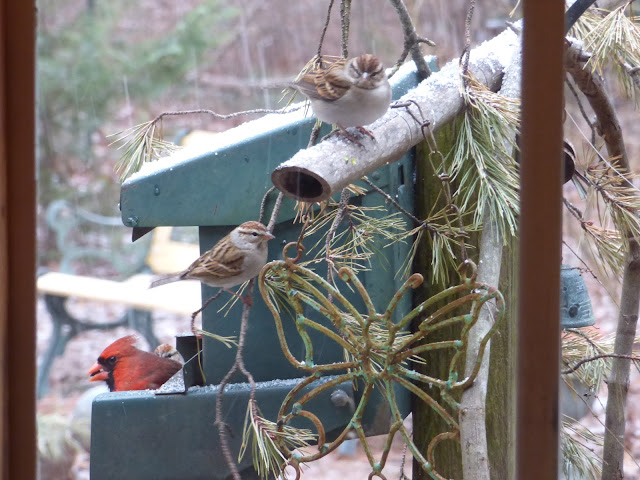 This was mom's window to the world

Monday Jan 20, MLK Day: I share in his dream.
The mail won't run today...I have 2 letters stamped and waiting to go in the mail box, nothing really important, just some cards to my lovely sisters.
Another hard week spent trying to come to grips with my reality if one ever really comes to grips. I wanted to get a lot done this week, no call from the mechanic.  I'm afraid to call him.
Bright spot:  look who decided to come visit, since it got colder. 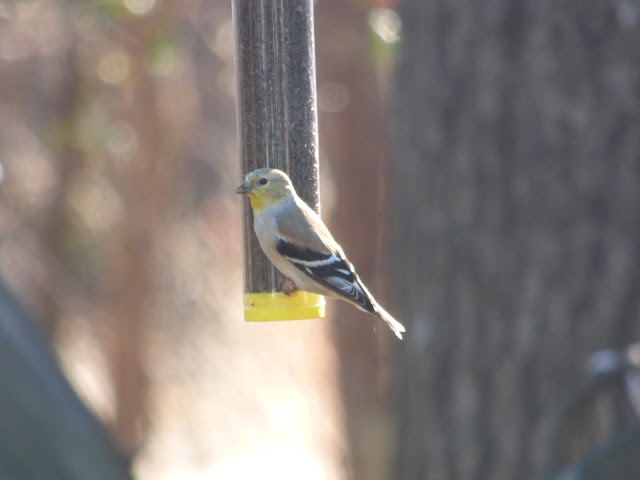 
Tuesday Jan 21, 2020
Got my van back mechanic was able to replace the 2 plugs I couldn't budge, but the original problem is still there.  He said that plug had not been removed in a long time.  I had the plugs done 5 yrs ago...Looks like they didn't replace the ones they couldn't get out!! So original problem was a jerk and slight deceleration up hill with a ticking sound.  So back to the guessing phase.  One more thing I can do without any help (very simple to do)  is replace the plug wires in case one is grounding out.  I have ordered a set and can pick up in store tomorrow. Had a 20% off coupon so used that.  Fingers crossed.  I will pick up some fuel injector cleaner also.  Made a pot of very hearty veggie chili and now have a blazing fire in the fireplace.  The dogs are fed and sleeping peacefully in front of it. Later at 8 pm I will watch Jamie's 30 Minute Meals, and This is Us on the boob tube. Bed by 10! 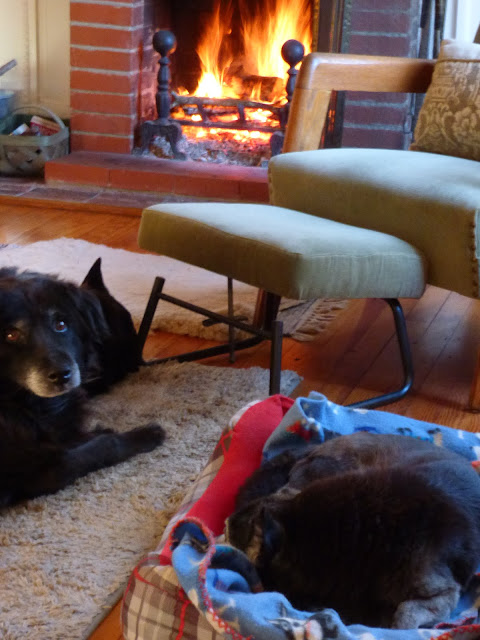 
Wednesday Jan 22, 2019
Picked up the plug wires, and back home had to allow the engine to cool off so I decided to do it tomorrow.  I felt tired.  I won't be venturing very far until I get this auto problem solved!  I made a wonderful salad of green leaf lettuce, with baby spinach along with black olives and some nuts on top..a nice dressing of olive oil, balsamic vinegar, and honey.  I had some seasoned crusty bread, and later 2 donuts HAHA.  COLD so once again I have a warm fire burning yet my feet are cold!  I watched the latest episodes of my favorite You Tuber, Chrome, of Vancity Vanlife from Vancouver Canada, and of course his dog Cruz, they are trying to figure out where to mount their solar controls to go along with the huge array of new panels on top of their home/van.

Thursday Jan 23rd,
Clouds are rolling in just in time for the weekly rains.  I got up early already had my head in the engine of my van by 09:30.  When I say in, literally I am on my hands and knees with my head in the engine, as most of the engine is inside the passenger compartment.  Here is what I found!  The Ignition coil wire was corrupted! 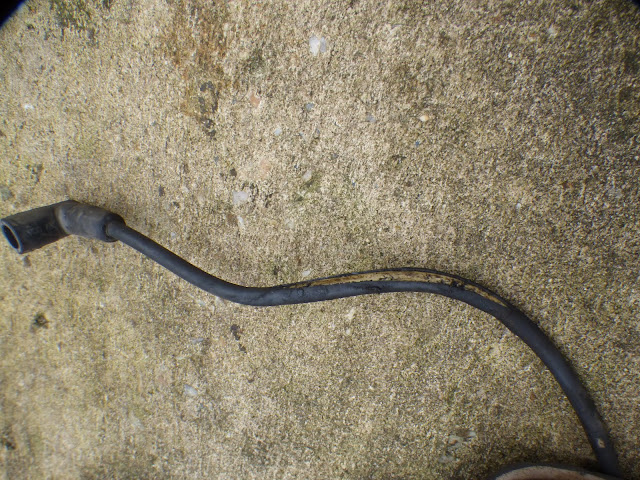 the outer sheath had a huge split and was melted to the valve covers.

So no wonder I was getting that jerk and performance decline!
YES.. problem solved, I replaced all 9 leads, and now it runs like a 19 yr old top again, which means its still a rolling time bomb...could die at any moment.

This time there was more than $80 saved probably 3 times that much, even with the $60 I forked out for the 2 difficult plugs to be done by the mechanic. 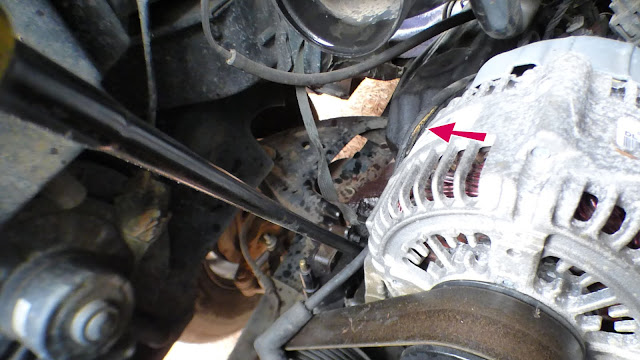 arrow points to the bad spot in the wire

Later I rode over to one of my favorite sparrow fields...and found even more American Goldfinch.  A very productive day. 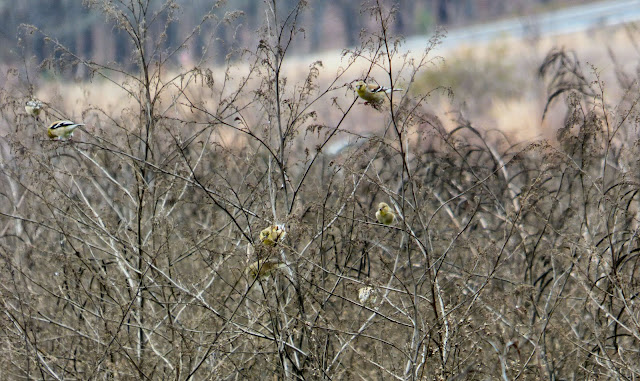 Seven in one shot!


Friday Jan 24, 2020
MY sis's birthday It's your day SIS!
Chore day for me.  Laundry, vacuuming, run dishwasher, fill the bird feeders, bring in wood, brush the 3 hounds, and more that I've forgotten already!
It rained early and now at 6 pm it's raining again, but the entire day was ok!
I checked out another Sparrow area in the afternoon Fox, Field, White- Throated, Song, Chipping,  E. Towhee and others present. Must have been 20 Field and 25 Chipping Sparrows flush out of the field as I walked by. This is not one of them...lol this is a Dark Eyed Junco I found one day this week... 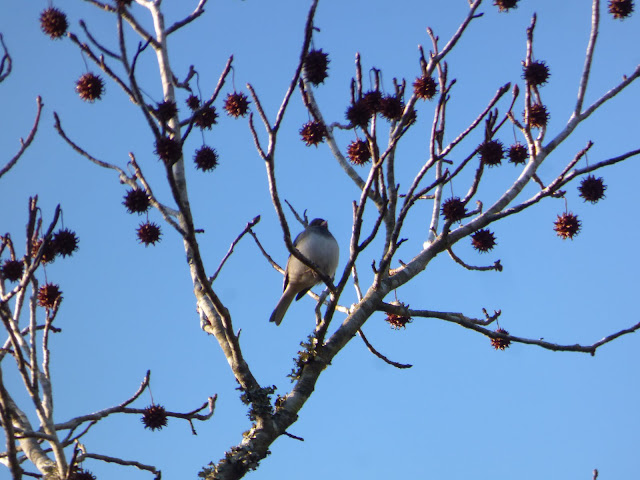 Sat Jan 25, 2020
Today it cleared off, and got a bit cooler.  I went in search of my Mom's oldest and dearest friend.  She is 96.  We lost track of her when she moved in with family and we didn't know where they lived...We were not able to let her know of Mom's passing so I did a little detective work today and I found her!  Of course my message was not a good one, but it was still so good to see her.  She would call my mom but she didn't know her own phone number as they had given her a cell phone to use to receive calls...each time we asked, she was unable to tell us, so I knew sooner or later she would try to call Mom and find her phone disconnected...as we found when she left her home.  When your memory goes, you don't think to let friends know where you are...and you can't remember how to dial the phone so you have to keep asking someone else to do it for you....so it was so great to see her she is being well cared for by her daughter in law. Along the way I spotted these guys in a pond...so I pulled over There was a male and a female Hooded Merganser. 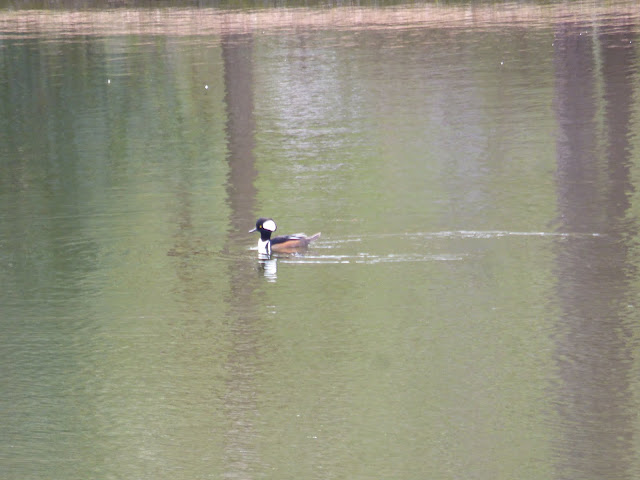 So a little different format on the blog this week, and that's my week in nutshell.