There is not much camping around the Petrified National Park, so I was happy to see Homolovi Ruins SP was open, at one time it closed down... I called and the ranger told me he had 15 spots still open and I didn't need to reserve one.  Happy Happy!

I got there just as the ranger was about to close...he let me chose my site from the park map, I had made an entry in my travel planning book to ask for site 40 in the non electric side...and I got that one,  right by the bath house and also by the nature trail so I could walk the dogs.  Turned out to be the perfect site for us.

In the shower I locked the door and while I was in there someone tried the door, it was locked, but then they proceeded to knock and rattle the door again, I said "YO It's locked" I've been watching too much Walt and Jessie...lol later I walked dogs. Had an easy dinner of tomato sandwich, deli potato salad from the Green Valley Walmart supply run, and a fresh avocado. Yum!

April 3rd Day 18th of my journey.
In the morning I set up the table  so the doors could protect my cook site from the wind.

Once we were packed up I drove to view the ruins...there's 5 sites all together and 2 are open to the public here...so I visited Site I first.  Not much of the old walls have been unearthed but there is a lot of pottery shards and the waste pieces from point shaping at this site.

Site II There is more of the ruins exposed and more pottery shards!! Beautiful and it must be extremely strong to have withstood snow, wind, rain etc all these 100's of years! These ruins continue to be important lands to the Hopi Tribe.  Once again no one knows why these villages were abandoned by the Anasazi. You must come to your own conclusions...Alien Abduction works for me.

the Kiva was a central meeting spot for ceremonies and spiritual activities.

At this point in the trip I drove Hwy 87 North turned left and to the Hopi and Navajo Indian Reservations.  They do live in an awesome landscape.

Although the tribes are more prosperous now due to oil and gas on their lands, they continue to be humble.  They live a simple life which is what we all strive for...so what's not good about that.  I turned east on Indian Hwy 15, to Indian Wells (for Tony Hillerman readers, Slick Nakai was holding his Baptist Revival in Indian Wells)

I  picked up Hwy 191 just north of Cornfields...and then onto Chinle, one of the larger towns on the Navajo Res.  I have visited Canyon De Chelley before so planned no stop there this time; my destination this day is Utah.  The scenery is a destination! Utah should be named the Red Rock State.

Once I got to Bluff I remembered Twin Rocks Trading Post and Cafe!  I would treat myself to a lunch/dinner made by someone else's hand and sit down and eat with knife and fork and napkin!    I have followed the blog  from the Trading Post for quite a few years..I should have gone in and introduced myself but when I peered into the window from the porch there was customers in the store so I went to the cafe next door and had the Veggie Taco Salad on Gray Bread which is like the Fry Bread but not deep fried in Animal Fat it's grilled like Naan Bread.  Delicious but so much I was not able to finish it! Where is the photo of my food? Dang I didn't take one.

From Bluff to Blanding, then I found the Devil's Canyon Campground a NFS Camp in the Manti-LaSal National Forest...with Seniors discount $5. It was one of the nicest FS camps ever...had a paved road, each site had a cement slab,  a nice big iron picnic table, and a cement fire pit! I don't normally build a fire IF it's buggy or lots of Mosquitoes I will make what I call a gnat smoke..but most of the time I'm too tired to deal with it! I do carry a Firelog with me jic I really want a fire it's just lite and relax and it will burn up to 4 hrs!

Got in sort of early like 4 pm had already had my dinner and so I fed the dogs and gave them a nice long time off leash in the closed section.  I met some ladies in their mid 70's who had rented one of those new Ford Van's the Econoline? And they were camping and visiting the National Parks of the West like Mom and I did back in the 90's.  They were from Maryland and Delaware.  Strange I met 2 groups of ladies from Delaware! So the funny thing was when I opened the box to get my camping form to fill in, there was an envelope in there with cash in it! Ooops someone had dropped their money in the out box not the in box! Campsite 8... it was them...so they laughed and asked "can you tell we're new at this?" I just didn't want someone to steal their money and then the Ranger might check and see no payment from site 8...one never knows...

on the road in Utah, the LaSal Range.

Not many birds there at all...too cold!  We loaded up after breakfast and headed north on 191.  Once we got to Highway 211, I turned left.  My destination another Newspaper Rock the one most people are familiar with...once again a spot I had planned many times to turn off and see... and finally I am!

It's really amazing!  So many petroglyphs!  I took my photos and turned back if you keep going on this road you come to Canyonlands National Park, I visited  in 2011.  You can actually see it from this high vantage point...

On the way back down we took a side road up to Foy Lake...figured to have a dog walk and a snack so we did...

After this break we headed back north on Hwy 191...
more roadside beauty along the way...

Once we got into and through Moab, once a very quaint town....now it's discovered

and once through Moab, Hwy 128  is another found jewel...over crowded and over used...but still beautiful.   The highway follows the Colorado River and the views are stunning can hardly blame anyone who wants to discover it.

Just one after the other...eye popping awesome.

We stopped here for rest and a dog walk...Then continued on...before  you know it
I was on I-70 east and pulled into my sister's home about 5 pm.
Wonderful dinner and sleeping in a really comfy bed with heat was sooooo nice.  You really appreciate the comforts of a home when you do without it for a while...

So nice to see Evening Grosbeaks right up in the trees outside her windows!  A flock of 6 or so showed up to pick through the blooming trees.

Beginning Mileage 218912
Ending Mileage 223040
4,128 miles
Thank you all for following along and all your encouraging comments!  Next up real time!

From the town of Snowflake after the oil change...
I headed up Hwy 77 north toward Holbrook, AZ and took hwy 180 towards the Petrified Forest National Park. I have always wanted to stop and visit but seemed yo be on my way to someplace else...this time it was a destination.

There is a Scenic drive that brings one from the south entrance to the north entrance of about 24 miles...
I believe I pulled over at every pull out...

At the South entrance, a private enterprise called Crystal Valley sells all sorts of trinkets..

I pulled up at the Visitors Center...

Got my passport stamped, bought a collectors coin, and even got a penny turned in the gift shop!

The big draw here is the natural history the petrified wood and fossils and the awesome landscapes.

The Agate Bridge...110 ft petrified log bridge that has been reinforced with concrete to keep it intact...

The Blue Mesa...this reminds me a lot of John Day up in Oregon.

One thing I really wanted to see but now a days you can't walk down to really see it, is what they call Newspaper Rock...a Rock covered with 650+ 2,000 yr old petroglyphs.  The sun was so strong it was hard to get a decent photo...but Anyways...I understand they need to protect it from too much human contact...(it is funny how the Fed's recognize the significance of limited access to everything except guns????)

Near the end of the route is the Old Painted Desert Inn...which was an icon on the old Route 66 that used to come through the park..

.the inn was transformed by the CCC into it's present look of adobe and timber.  Originally it was made of Petrified Rock!  My photo of the old inn from one hanging inside...

It was so cool inside amazing..Im actually referring to 2 things the decorative style and the temperature!  I ended my own tour here as the parking lot at Painted Desert Visitors Center had no shady parking spots  to park the dogs in so I left the park.

The same day I was there a lady driving this cycle and sidecar was there and she had a large black shepherd dog riding in the side car! I saw her in one of the bathrooms and asked if he ever tried to jump out she said not so far...amazing.  She did say he doesn't really like it when she drives fast he will lay his head down flat. 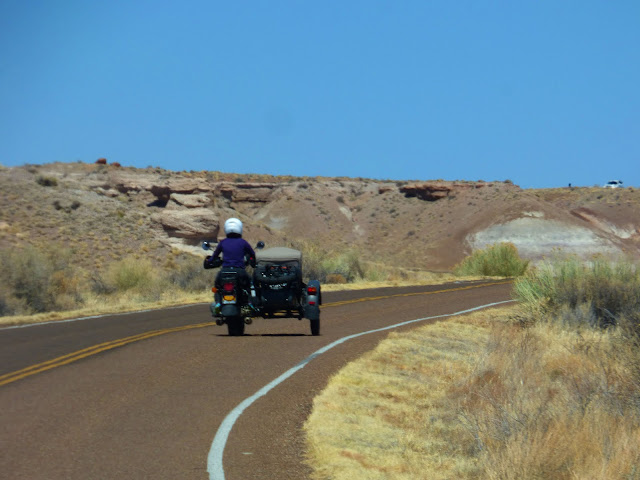 So finally added the Petrified Forest to my memory banks...hope I can have them with me till the day I pass!
I headed West on I-40 toward Winslow...the wind is always howling in this area, the last time I came through the I-40 was closed down due to a dust/wind storm...I bedded down in a cheap motel that time and waited it out the next day all my belongings were covered with a fine layer of red grit. My destination this time was the Homolovi Ruins State Park, AZ!
------------------2 b cont--------->