Did you turn back your clock? I dont like the daylight savings time....makes me wish I lived in Arizona, they have refused to do this silly clock manipulation thing...and I think they have the right idea...why not start school an hr later? Im sure the children wouldn't mind!--
So now Ill be up before the chickens and yawning by 8 pm!... Maybe in the spring when its DST again...I will hold a solo protest by not going along with it ---will be very confusing tho...lol

I had an almost quiet Halloween, a few gun shots in the night to keep me on my toes...the trials and tribulations of living in the southern USA where hunting is the number two hobby right behind getting liquored up and shooting at the moon. (However I was stone sober when I shot this moon!)
It's not a good time of yr to go traipsing off into the woods, one could get shot--makes me yearn for the good ole' days before the NRA's strategy and very successful marketing campaign armed every redneck within 500 miles of us...spouting the right to bear arms as their slogan... I guess you can tell I'm not happy its hunting season! I used to walk in the woods around here with my dogs off leash but that can never happen again now!!Sigh--

~Lets see what else is new in my little corner of the world~..hmmm well this little pumpkin we didnt carve we will make a nice pumpkin pie, I have a great recipe...

Here is last yrs pumpkin stem photo...I have a thing about stems---

Snapped this one while driving 3 yrs ago...
So it needs to be straightened... but I had to get these big pumpkins proudly displayed on someones porch! I yearn for a record holder of my own some day

and here is an odd one---
I didnt get a shot of this so you will have to use your imagination--before I left to take the trip upstate last Wednesday I decided to check my oil and all those other liquids under the hood...I opened the hood, propped the hood support rod up then turned my attention to the engine and unbelievably there was a NEST right on top of my engine!! At first I was puzzled what it was then realized it was a field mouse's nest! I couldnt believe it, I removed the nest before thinking it would have made an interesting photo!! It was complete with shredded mop strings to make it soft and warm, and half eaten acorns that must have been a midnight snack...then the big shock was when we raised Mom's hood to check her fluid levels several days later and Bingo another nest!! This time I had the camera....this nest looks older than the one I found in my engine...and it was over to the side not right on top. I have to wonder if they went along with us on our travels??? 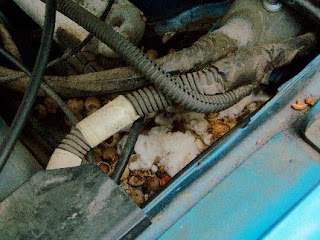