(I am not in favor of the election results in this nation, because of the lack of caring the GOP has shown for climate change, public lands, drilling and mining leases, along with other threats to our environment! This regime could have devastating consequences for many centuries to come if they remove what little protections we have to keep our land, air, and water from looking like China's! Not to mention human rights women's rights with a Supreme Court that we could be stuck with for decades!.  I wonder what excuses will be made when the Industrial Jobs don't return as promised....as automation has replaced those jobs, EVEN if they can stop companies from moving South of the Border they can't stop them from using robots to do the work...and that Wall? Please the wall has already be built between the people of this nation...  Great Spirit Help us ALL! I am flying my flag upside down for 3 days and then I will remove it I'm no longer in support of what it represents.) If you still have a mind to read my blog then lets go!!

This post covers the period of Sept 23rd-25 in my continuing saga of the fall trip!
Hwy 85 South took me out of ND and into SD thru Belle Fourche then Deadwood, but I didn't stop there it would have been fun to see!

I made a quick stop along the road to see and pay respects to the fallen here at the Black Hills National Cemetery...It gave me the reverse feeling of what I had felt at the International Peace Garden...hard to explain but the sadness was overwhelming.

each stone does not just represent a person's life over too soon, but the loss felt by the family members to this day..fathers brothers sons sisters mothers daughters---> Gone, and possibly forgotten. Many of these soldiers died trying to stop a belligerent regime in a foreign land.

I guess I should have gone to Deadwood instead.  Back on the road I went south on 385 through The Black Hills National Forest and Custer State Park.

BOY... Custer SP is expensive and although I had thought maybe, I sure didn't stay there...they also have a very high day use fee...so I continued on then used 16A to 87 South to Wind Cave National Park! SO glad I did too.  In Custer there was a Bison Round up going on looked like a big dusty noisy event...I was thrilled to cross the cattle guard into Wind Cave and immediately came upon a quite and peaceful Buffalo Jam! I saw no Bison in Custer where the round up was going on-weird.

No one was trying to round these up or harass them...some people were out taking photos and that was it.

so immediately traffic came to a halt then a crawl as we slowly made our way through the herd...

It was getting late and I needed to find the campground and get a site for the next 2 days...but with beautiful pink clouds like this and a Bison herd I was hard pressed to get in a hurry!

The Elk Mt. Campground can close early depending on the weather, but I was so happy to hear on Radio AM channel 1610 that it was open ! Yeah. Cost me $9 per night And the only photo I got of the
campground was this shot thru my window  during a horrific thunderstorm on the first night I was there.  As I said I got there late in the day so I basically got in my site had a quick meal just in time to take cover.  I actually moved after this storm to the site you see in the background on the far right. Because the wind was whipping me pretty hard where I was parked when I took this. 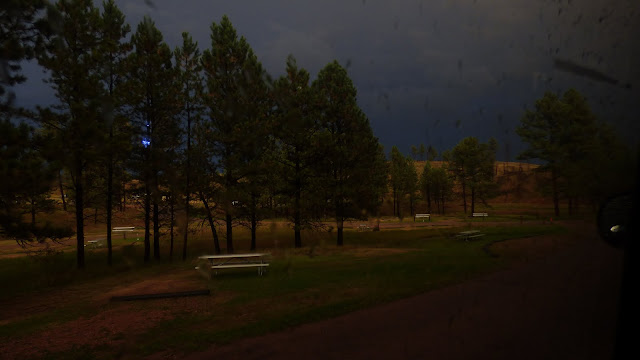 I really do believe this was the same storm that hit TR the morning I left and I think it arrived at Wind Cave the same time I did!

The next morning it was cool but clear!  Wind Cave is a great place to stop, another park created by TR in 1903...even if  you don't want to tour the cave! I didn't, as I've said before I have been in some nice caves and am not too fond of the dank cold tombs! I skipped the tour of the cave and instead I hiked, enjoyed the wildlife, the scenery, and the low volume of people as everyone was in the Cave! I watched the movie in the VC that shows all the highlights of the cave. The CCC did a lot of building here as they did all over the place, they built the VC, the Elevator that is still in use today, trails and roads! 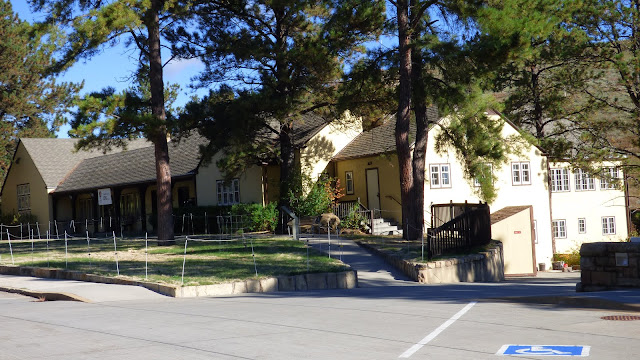 the cave is directly under the VC! It's like 300 steps down?  But the elevator brings you back up...its located in this building.

this honeycomb calcite deposit called boxwork hangs all over in the cave and there was this piece on display  in the elevator building.

I hiked on the Wind Cave Canyon Trail its an easy trail following an old road, it has some nice red rock and I had hopes of seeing birds but didn't really see anything new except this guy! Not a brd for sure...he may look large in this photo but he was not much more than 18" in length.  I had some trouble ID'ing this snake its a Prairie Rattlesnake which makes sense!

Of interest to me was the now empty cliff swallow nests, Nice to actually see them in the wilds! I've only seen them attached to man made structures!

and I came across a Bison Skeleton but no HEAD that made me think poached!

Back on the scenic drive I scanned acres of Prairie dog towns looking for owls yet again and none were seen...

other wildlife I spotted were some fat and awesome mule deer, one young buck in velvet...

he seems to be eating some really thorny shrubs!

I had no luck with bird shots this kestrel sat still for half a second!

and a pronghorn antelope ran past me, then stopped to investigate a cactus!

and lotssss of American Bison!

And the Skies Are Not Cloudy All Day, at least after that torrential storm of the night before!

PEACE
Eleanor Roosevelt: You must do the thing you think you can not.
at 3:51:00 PM