The wind died off as we headed west on Hwy 5, out of Mohall, ND and spent a bit of time in Des Lasc National Wildlife Refuge.  I learned they opened up one of the scenic drives along the Des Lacs lakes only 2 weeks each year and I hit it just right.

the reason they open it is so everyone can come and view the fall foliage!

the wind picked back up so birds were staying down mostly but flushing when I got close... 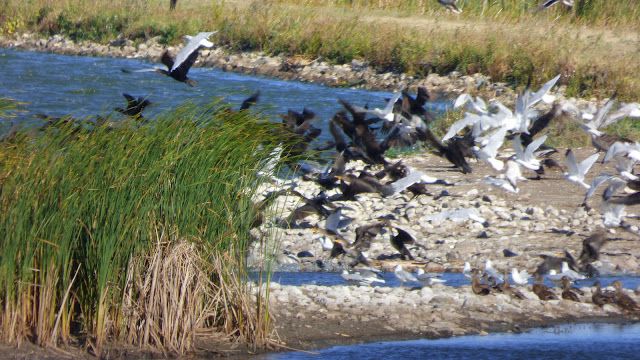 The scenery was brilliant!

Nearby was the town of Kenmare and in the town park spotted this Danish styled windmill it was built in 1902  and was used to grind grain!

this north-western region of ND has vast grain fields and has been a mainstay of the economy for centuries.

here's a few of the old buildings I admired as I continued to travel west on Hwy 5 almost to the MT line in fact only 5 or so miles from it..

I was thrilled to find a Vesper Sparrow along the roadside here.

Someone went to a lot of trouble to paint lovely murals on the large rocks by the roadside...like this one

I wish I had been paying closer attention cause I believe I passed a few by but realized it too late to turn around.  I saw the writing rock on Ancient Aliens! It is believed these 2 granite rock petroglyphs could be 1,000 yrs old.

and there is a second stone with similar carvings, it was originally 200 ft away but was moved beside the larger one and they now rest inside a stone house for protection.

some people say the rocks are a hoax, and the people on the Ancient Aliens TV Show said they are probably carved by natives who had encounters with space aliens and the pictures depict a craft of some kind,  I think they are old rocks carved by Native Americans.

Plenty of sites were available as the park was in it's off season.

All the sites were level, had a table and electric, the bath house had hot showers and was clean, but not heated brrrr. I ended up staying here 2 days because I had to get a , tire, wheel alignment, and  an oil change.  I drove down to Williston for that, and to get breakfast in one of their hip coffee shops.  Williston has that feel of  "Western"  its a really nice downtown area, but again the nearby oil fields have ruined the beauty of the area I really hope they can get them out of there soon.

the Sakakawea Lake with the ND Badlands behind it.  I got up early and Casey and I did some sight seeing around the park in between our appointments to get the van serviced.

one of the short hikes we took, one thing I enjoyed is they mowed a wide path in the prairie grass to make walking easier.  This is the tent campers area right by the water, they have cabins to rent also..

I enjoyed watching the Western Grebes down by the marina and boat launch area...

And green pheasant in the grass by the campground...can you find 3 in this shot?

then the beautiful male came right out in the open...

this is the national bird of Japan so of course they were introduced into NA for hunting and feather for hats! Normally we see the ringed neck but this one has no rings!

these are white tailed deer...they sure can run fast!

the view by the water is amazing...and so are the trees and shrubs

how about this wooden arch? Pretty cool...

the TREES were in great fall color.

I would def recommend this park if you have a boat, even better, you can cruise the river.

From here I was not far from Theodore Roosevelt National Park and my next planned stop.

PEACE
Eleanor Roosevelt: You must do the thing you think you can not.
at 9:56:00 PM 8 comments: Links to this post

A PACT Between Nations

In Real time last weekend we were finally able to get in the Beach trip and I hope to make a post about that soon, but I really wanted to keep my timeline  in order to finish up the posts I wish to share from my September trip! I was away for 4 days then I ran out of Data uploading all my photos finally did get all the photos I wanted on Flickr..now I hope to get the beach trip on there.  Blogger removed my slideshow that keeps you linked to my Flickr Photo account if you wish to keep up with ALL my photos you can go to
https://flic.kr/ps/CoKZo

My camp at Lake Metigoshe way up on the border of Manitoba Canada and Dunseith, ND enabled me to get an early start to visit the International Peace Garden that sits right on the border of our two nations! If you ever get close you should go and enjoy this awesome garden.  It was July 14, 1932 when this Garden was dedicated and this is what is written on the rock cairn that is the dividing center:

I'm sure it depends on the time of year you visit as to exactly what kind of flowers you will see, so this is the fall version, as I was here on Sept, 18th and this is the 49th parallel so they are in plant hardiness zone of 2B...so it's u-p there!

I was amazed at the mirror images of the North and South sides of the garden...so when you stood on the North side you were in Manitoba, Canada, and on the South side in ND, USA!

I took a million photos or so it seemed...and none do this place justice.

I hope you can see this is a large hand freeing a dove in the center of the fountain...
following the walkways from the parking lot up to and beyond the sunken garden take you up the hill towards the Peace Towers and the Peace Chapel.

along the way are all sorts of beds full of various plantings...

I liked this peacock with his tail in flowers.. this brought back vivid memories for me..so I sat down and cried my eyes out!

the bell Tower is on the North side and it chimes every 15 mins and plays a really nice tone on the hour..

when you finally reach the Peace Towers its fantastic!

However the towers are crumbling so they will be torn down and something as yet undecided will replace them...

The Peace Chapel is right next to the towers ...inside there are quotes lining the walls written on stone...

the grounds around the Peace Garden are spectacular in the natural setting as well...

I enjoyed walking through this archway of tomatoes and greenbeans in the vegetable garden area..

and some of my favorites like Sedum were in their glory!  Here it is paired with blue spruce!

You really have to see it for yourself! I left the  garden in the late afternoon after reentering the USA you have to show your passport to get back into the States when you leave the garden...so be prepared for that.  There is a very expensive campground at the Garden I did not do that, its is a $15 entry fee well worth it! We drove west to Mohall, ND a small town that was in the middle of the windiest day EVER! I stopped at their fairgrounds to spend the night

and watched the sun set...

I have found that municipal parks are cheap and can be nearly empty of other campers. This one however was expensive, but it came with a bath house, hot showers, trash cans and Electricity! $20

Casey and I couldn't wait to get out of the wind and move on to the West border of ND and Montana for our next stop!!

PEACE
Eleanor Roosevelt: You must do the thing you think you can not.