Like I mentioned the Elk were on the road next morning when I headed to the day use area to make breakfast...

...the dogs and I enjoyed watching the day take shape in this awesome landscape, the clouds breaking up the sun filtering through and making those bright spots on the mountains...

after breakfast and the dog walks we packed up and continued our tour of the Trail Ridge Road...
(map if you wish to follow along)

The views are just amazing, and the occasional pop of autumn color was eye catching.

I think I pulled over in every single pull out.

I took a short hike to Lake Irene...

then on to Milner Pass and the Continental Divide..

From this point on we were above tree line, meaning trees don't grow once you get to about 11,000 ft...so the bare rocky peaks that give this mountain range it's name stand guard over everything.

This heart shaped patch of snow caught my eye sitting up there above  tree line, this region is referred to as ALPINE, and there is tundra here just like at the Arctic.

the Cache La Poudre River looks like a snake in this valley below on it's way to the Pacific...

I remember last time I came here Elk were all along this river grazing it was quite amazing...

here goes the road climbing up and up...

And then we arrived at the Alpine Visitors Center, now I can't even tell you how COLD and windy it was up there! Someone said the windchill was just above freezing, yet some people didn't have a coat and wore flipflops on their feet...I guess it's the old cub scout leader in me that has "Be Prepared" imprinted on her brain!

Got my passport stamped and went out back to view the 13,000+ ft peaks that sit behind the center...

up in one of the high meadows a herd of Elk hunkered down out of the wind...just below that moraine field in the upper right of the above photo...here's a zoom of them

And off to the left is where the Old Fall River Road ends...it used to be the only road to get through the park, and was in use until 1932, this section is about 10 miles and is open only one way, uphill...you can pick it up over near the Sheep Lakes area and it ends here.

I now regret that I didn't take the time to do it..and that the campgrounds were full in the Beaver Meadows area...so I opted to head toward Fall River Exit...

And soon the road peaked

then started down the other way and back slowly into the trees...

At the Sheep Lakes stop I saw this WANTED poster! Kinda cool.

Soon I exited the park, better planning could have allowed me to stay longer but I decided at the last minute that I would go here...after I saw all the flooding and bad weather in the southern US, I decided to head North....next time I will go to Beaver Meadows first and def drive the old Fall River Road.

Once you exit you're in the town of Estes Park,...it has nothing to offer me, but I did stop and see the now Famous Stanley Hotel! Yes the Shining Hotel...Stephen King's famous novel the Shining...

it was undergoing a major reno...but I drove around a bit...

then I crossed the Big Thompson River and continued North!

On to Rocky Mtn, NP

Up and down and all around is the direction I went.  Just a note it is NOT easy traveling in a van with 3 dogs 2 of which take up nearly as much space as I do! Watch every step or you're on somebody's tail or you step in the water bowl and have to change your socks.....AGAIN!! OMG note to self  "pack more socks"...  Annie is the explorer she likes to chase after scents, Flossie is the guard dog she barks at EVERYONE, and then she stink eyes me when I'm yelling "shut up, stop barking" I pull the shades down so they can't see out...just to control the barking when I'm not in the van...Casey is the escape artist, must keep my eye on him sharply.  So that's my "motley crew" of  three.  Quite a handful even at home. Seems I'm always walking them, feeding them, grooming them, putting out more water, straightening their blankets....WHEW so much work...trust me when we're on the road their needs come first.

Casey saw this and he barked...lol

I think we'd have spent another day at Routt NF if it had been a little warmer! So pretty there...and tranquil.

We didn't get half a mile down the road after leaving camp and found this awesome lake with golden reflections, had to stop and see...

Yeah it really was that beautiful...A few white crowned sparrows were playing in the bushes.. 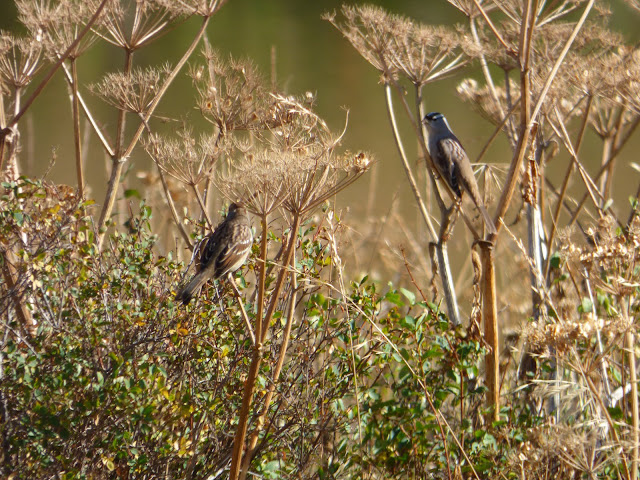 This route takes me past some large bodies of water: first  Wolford Mountain Reservoir.

The dogs had a good run in this open area we had it to ourselves...Walford Mountain in the background..

Back on Hwy 40, I noticed this sharp peak.

Passed these 3 guys on a bike tour, they look well outfitted and making a good pace.

Near Kremmling the trees were golden as they curved along the edge of the Colorado. River

Where Hwy 125's southern terminus intersects Hwy 40 is the Windy Gap Reservoir Wildlife Area it's a good spot to stop for lunch and to scan for waterfowl... 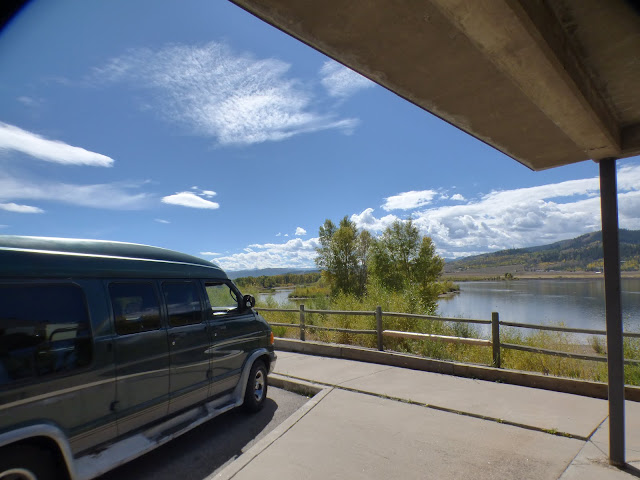 Distant, but with binoculars a short list of what I saw there: White Pelican, American Coot, Lesser Scaup, Gadwall, Mallard, Double Crested Cormorants, and what I thought was an Eurasian Wigeon in the end turned out to be an American Wigeon, wrong again! One of these days I will be right, because I intend to keep at it.

Back on the road I took Hwy 34, and it follows the banks of these lakes, the next was Lake Granby.

and then Shadow Mountain Lake...that really is a dark mountain...

And last is Grand Lake!  Of which I did not get any decent photos...and the clouds rolled in just as I got to the Rocky Mountain National Park, and the Kawuneeche Visitors Center. (8,720 ft) Here the road becomes Trail Ridge Road, and at it's highest elevation it is  12,183 ft.  This road can close any time of year as the weather is brutal up there, so pay attention to the signs letting you know if it's open or closed.

Stamped my passport, bought a collector's coin, and watched the park movie in a very large screening room...outside the sun kept playing hide n seek...a few drops fell but it didn't rain outright till we were snuggled in that night.  In fact it rained the first 3 nights on our travels back.  As long as there is no strong wind I enjoy the sound of the rain on the roof of the van.

I found out Timber Creek Campground was first come first serve, so I headed straight there to get a spot for the night.  Snagged one, posted my Paid Stub on the post then went back to explore some.

... before we called it a day I took a hike  to see the Never Summer Ranch.  German immigrants, the Holzwarths, came here in 1917... 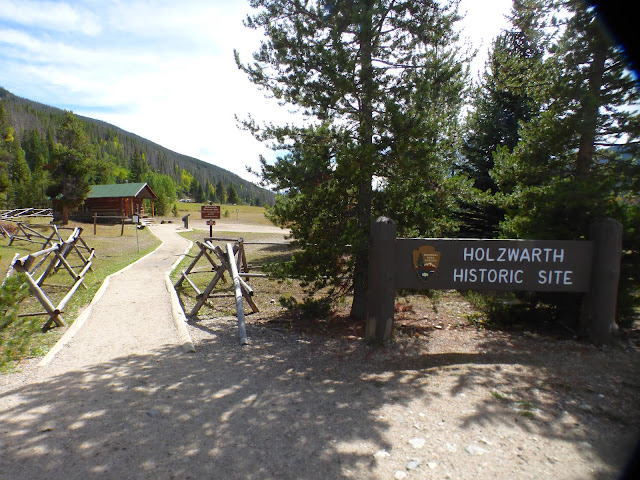 and started a cattle ranch then they changed it over to a trout fishing guest ranch and it became know as the Never Summer Ranch....you can find a good summary of the history and the trail  here.
I enjoyed my walk to see the cabins...I could hear Flossie barking for at least the first 1/2 mile, but I knew they were in the shade, the windows were down and it was cool, they had plenty of water and so all was good...felt sorry for anyone who parked next to them tho..

The Colorado was originally called the Grand River...I kinda like that name what say you?  It did create the Grand Canyon, see how things are connected....So anyways the headwaters are about 10 miles upstream of here...but that hike is much longer  I couldn't leave the dogs alone and they are not allowed on the trails, so I was happy to almost be at the headwaters here...and a little video next for sound ..

the hike was easy along a road bed, and it felt good to stretch my legs after  riding in the van all day, I enjoyed it...the cabins are still in good shape for the age, I could imagine the laughter drifting up on a starry night...when the guests were sitting around large campfires warming up and sipping camp coffee...

Spotted a Red Tail in this pine tree on the hike back... 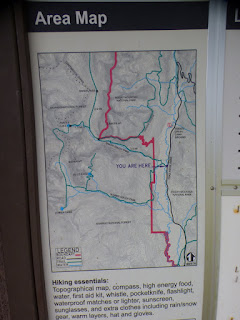 After the hike I backtracked a bit to the Bowen Baker Gulch Trailhead.  There's picnic tables there and one pit toilet and a trail that meanders by the river which is a stream at this point.  The view is awesome with this big meadow laying open at the foot of the mountains...and this is where we decided to have our evening meal in this quiet setting before hauling it over to the campground later and rubbing elbows with about 100 other people!!  This is something I've learned...when the campground is over populated or has little privacy, I go to the day use area where almost no one is cook my meals and sometimes they have covered areas and if it's raining that really is a good thing! Later I go to my campsite when it's time to close the door and go to sleep...and in the morning, I put on my shoes, get in the drivers seat and do the same thing, go back to the day use area... that way I can make my coffee and breakfast in peace and quiet with mostly no one around.

I gave the dogs their dinner then we walked in the woods by the river...

we walked around till I heard the bugling of ELK...so back to the highway and toward the campground, the road was lined with parked cars, so I parked and headed out to see the ELK.

It was a large herd spread out over the valley to the south of the Campground...several Bulls were bugling, this one was closest to me,

so the RUT is on...I noticed the cows have collars on...

Here's the bull in action...sorry about the traffic noise...

I forgot to get a photo of my campsite, but this is the campground below as we traveled high up on the Trail Ridge Road...my site was over on the left by that patch of trees..# 93. That valley beyond is where the Elk bedded down for the night they were on and around the road in the morning. 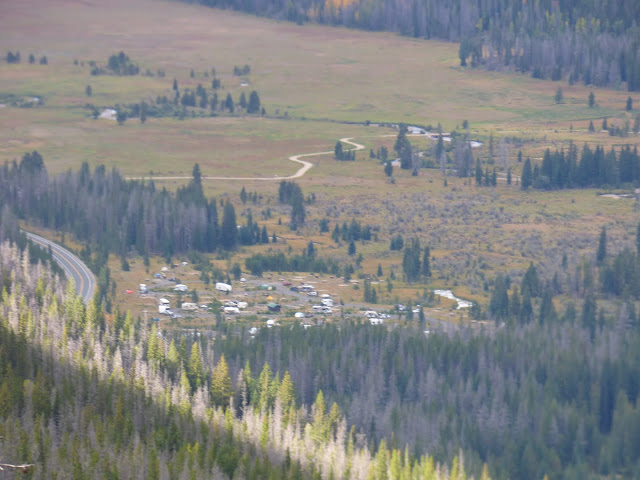 I'll pick this up on our 3rd day of travel in the next post!